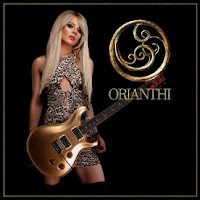 Orianthi is a tiger in a dress and the very impressive guitarist with a Platinum-selling past who rehearsed in 2009 with Michael Jackson in preparation for his ill-fated 'This Is It' concert series. Indeed. Jennifer Batten 2.0 only the better vocalist and the Greek Goddess (yeah, I know she's born in Oz) are about to unleash the beast on her latest offering to the Gods, namely "O". Oh? Too bad the songs will rather remind you of a little pussycat than a roaring tiger? Meow? That's a bit harsh. She's teamed up with American songwriter, record producer, musician, Marti Frederiksen. Best known for his work with artists/bands such as Aerosmith, Buckcherry, Sheryl Crow, Daughtry, Faith Hill, Foreigner, Mötley Crüe, Ozzy Osbourne, Scorpions, Carrie Underwood, etc. Not to forget the excellent "Still Crazy" soundtrack and we (RockUnited.com) know him since Outlaw Blood and Motherland.

Frederiksen is usually the same as quality music, up to a certain point, however, this time it's unfortunately not always the case. Nothing that really stick, poke, or leave the truly lasting impression in the year of 2020. The riff of "Contagious" gets the ticker going at eleven only to clam down as we notice the similarities to the late 90's rock and bands. The same goes for "Sinners Hymn" which feels like a poor throwback to 1997. Excellent guitar work, groovy as feck, but sadly lacking in the hook(s) department. The bluesy and hard hitting attack of "Rescue Me" is however pretty darn cool and Ori sings that "I'll be the craziest bitch you don't wanna meet". The perky, "Sorry", the catchy/quirky number in the vein of Anastacia (Left Outside Alone) meet Orianthi.

The ballad of "Crawling Out Of The Dark" will definitely remind you of Lady Gaga in that darn movie, which title I simply refuse to type, since we're all fookin' sick and tired of listening to the song(s) on every darn radio station. Could otherwise have been 'the' song for Ori as she sings with a very sentimental touch. "Impulsive", the jangled rock tune 'ala The Cult gone haywire and it feature the already classic lines of "Kiss me till we both turn to dust, forget the aftermath of desired lust", end quote. "Streams of Consciousness" goes through some serious guitar work as it touches Lenny Karvitz' territory before setteling down at the big O. "Company", the loopy drum/bass treble track that will quickly pass you by like a fart in the wind or this very review for that matter (how poetic?). Final verdict: Groovy, too groovy actually as we need more hooks. Many of the songs are steeped in the similar mode and mood and they're all kind of yeah, not too shabby, great guitarist, but nothing really earth shattering or life changing. Orianthi at Facebook