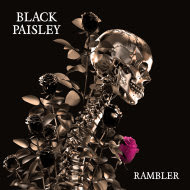 Keeping up with the Paisley's? Black Paisley and their power line-up of Stefan Blomqvist (vocals, guitar), Jan Emanuelsson (bass), and returning drummer Robert Karaszi (from the debut 'Late Bloomer') are now blessed with a new lead guitarist, producer, the former ELECTRIC BOYS member Franco Santunione. His idols are Joe Perry and Jimmy Page and not really the fast shredding monster. It's emotional-high-flying blues work throughout the record. On their third effort, "Rambler", the boyos has managed to change the musical direction a bit more towards heavier guitar-based hard rock but keeping the big choruses. Everything is better, bigger, bolder, than ever before. Not to mention catchier. In fact. This records' got more hooks than all the pirates of the seven seas. The hooks are flying across the room as I'm typing this and it's darn difficult to keep track on the razor sharp bastards. Add to this: Blomqvist sings/sounds better than ever and the rhythm section is tighter than Beyonces' pants and you're in for a rocking good time.

Black Paisley have opted to craft songs which run the full gamut of emotions and classic rock styles. Trying to scare us away with "Damned" and lyrics in the vein of "close the doors the storm is coming", the opening number set off the occasionally floaty guitar line and settles on quirky rock that could find allegiance with the strange and darn right motley crowd. It certainly isn't as immediate as the rest of the album's tracks and it might actually be the worst composition on the record and it's still pretty darn friggin good. The song actually gets better with each spin up to a certain point of course. Next up, "Without Us", the first single and a journey further into classy melodic rock and featuring the superb sing-a-long melody that will stick with you for the rest of the day, week, month, year. "Higher Love", bumps and grinds its way down the road like a cat in heat or in this case the fun boogie-woogie of Whitesnake. "Save The Best" again extremely catchy and storytelling at its best and I quote, 'Some are lost in the fire. Some are colder than a stone and all alone', end quote. Vocal Harmonies and chorus is a deadringer for Cheap Trick in their late 70's to mid 80's. Excellent.

"Timeless Child", probably the best lyrics on the record and just a classy number that lives and breathe through the guitar work by Santunione. It's got that Black Paisley vs. Europe sound going on at eleven and the groovy Electric Boys guitar solo. "Take Me To The River" is what you get if you'd like a Swedish version of Thunder and Whitesnake. I believe that's Snakes In Paradise? The guitars and a traditional and very catchy sounding chorus it sounds like the kind of thing Coverdale did on say 'Give Me All Your Love'. The soaring guitar work and intro on "Falling" harks back to the days of Gary Moore and it's just a beautiful magical little ballad that reaches out to touch yer sad and lonely hearts. Lol. I noticed only later that it's actually titled in brackets 'The Ballad of Mary Goore' and that's clearly not the best of disquise? Closing number, "Give It Up", another homerun and smoking catchy number that hits home during a sharp refrain and guitar solo. Final Verdict: Catchy Classic Rock from Sweden at its best and the likes of Europe better come up with something a lot sharper to keep up with the Paisley's. Highly Recommended. [Release date: 11th of December]. Black Paisley at Facebook