LORDS OF BLACK: "Alchemy Of Souls" 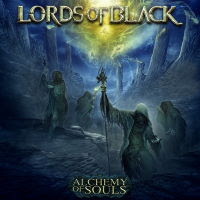 Formed by two world-class Spanish musicians: vocalist Ronnie Romero (Rainbow, Vandenberg) and renowned guitarist Tony Hernando. The new album "Alchemy Of Souls" showcases the band's fondness of 'Deliverance' and 'Sacrifice'. Indeed. The European Melodic Metal sound so talked about these days is evident in huge segments here. More Masterplan than Kamelot, but with a twist to keep us in the dodgy alley and backstreets of Lords Of Black.

To be frank. It's got a little bit of everything from extremely dull songs to excellent ones, and Hernando thought of this as and I quote, "by far one of the most difficult and emotional albums I've ever done", end quote. The making of the album took the unexpected and dramatic turn of events, starting with vocalist Romero as he at first decided to abandon ship, but came to the realization that he still enjoy sailing the seven seas and creating music together with Hernando. It does have to be said that Romero's voice never fails to convince with a vocal range that skims the sky. The man conjures up the fire and deliver the goods of metal's past, present, and future.

The songwriting on the other hand is very much either good or simply going through the motions. The emotional roller coaster ride throughout the record and consistency is sadly lacking. Several tracks such as 'Into The Black' or 'Deliverance Lost' leaves you cold as if you're still waiting for the punchline or in this case: refrain. The album is not without its highlights/points though. The uber catchy "Sacrifice" and the energetic power track of "Brightest Star" with drummer Jo Nunez in the spotlight as the man set the plot ahead with powerful time keeping. The soaring vocals above everything... what really drive this monster truck forward and they're sadly running out of gas just as we're about to reach the highest point of the hill. The poetic justice of "Closer To Your Fall" might just be the last stop as well as final great track on the album. It's all been (once again) nicely mixed and mastered by Roland Grapow (Helloween, Masterplan).