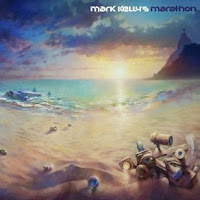 "We think you'd like our planet. We've got Richard Strauss and The Beatles and Scooby Doo. Who else can say that?". Mark Kelly's Marathon is a race for humanity and we're running out of time? The brand new Progressive Rock Project by the Marillion keyboarder is acually not the concept album as such. Several different subjects such as flight, science fiction, grief, love, abscence, biological science vs. free will, etc. all come together under one grand umbrella like structure where the ivory tinkler crosses over stories and genres with ease and grand arrangements. 30 years in the making? The result is astonishing and it's actually the team effort consisting of Oliver M. Smith (vocalist), Pete 'Woody' Wood (guitar) John Cordy (guitar), Henry Rogers (drums) and his nephew Conal Kelly (bass). M Kelly is indeed the maker of songs, however, Guy Vickers is the fellow behind the lyrics and quite the vivid storyteller.

The booklet hold extensive liner notes about the stories as well as lyrics of course. Recorded in lockdown as they couldn't get together in a studio, each member was responsible for coming up with and recording his own parts and was his own engineer and to a lesser extent producer. Nonetheless. The sound is crystal clear and surrounded with space. Smith (Countermine), the excellent vocalist and sort of the cross between UK legends such as Peter Gabriel, Simon Le Bon, and the hint of Paul Young. The latter from Sad Cafe of course and not the 80s crooner a'la where-ever-I-lay-my-hat. The DVD of their first meeting and playing together as a band in July 28th of 2020. 'Don't film me bringing in my own gear' the famous Mark Kelly quote while Ollie go absolutely apeshit over Conal Kelly's double-neck bass guitar and thinks it's very AC/DC? Yeah. We don't know either. Singers are not musicians? lol. Not fair, he's got the tamburine and constantly worried about studio temperature. To be honest. They're sweating like pigs in the studio. Are we playing in E Minor or G? It's not always easy to be the progressive rock guitarist, simply ask Woody. It's nice to have the DVD of all the music and keep in mind that it's all been recorded during one hot summer day in I would guess rather smelly studio of Peter Gabriel's. The behind the scenes moments are a bit on the short side though.

CD: The superb +10 minute long three-part opener of "Amelia" is the story of pilot and feminist Earhart as she died while flying solo across the world. "When I Fell" is painfully beautiful and moody and speak of love and grief and the lines of "I watched the light fade from your eyes" are going to stick with you for quite some time. Six minutes in length goes by 'just like that' as the Welsh comedian would say (RIP). "This Time" display a love for 80s Pop and there's a hint of both Duran Duran and Mike and the Mechanics. "Puppets" is actually very poppy too and darn catchy I may add. Marillion bandmate Steve Rothery contributed the lead guitar work and it's epic Progressive Rock with plenty of space, Mark Kelly's keymargeddon, and moments of Marillion and Sad Cafe. "Twenty Fifty One", a superb 15-minute sci-fi journey that is Kelly at his most adventurous side and yet pretty much old skool Progressive Rock, where part:2, "Arrival", is just the perfect mix of Marillion, Genesis, Peter Gabriel music. Final Verdict: Marathon is a direct punch to the solar plexus as you can't breathe and is often in a lot of Progressive pain. But you'll be darn glad to have experience the hit. Highly Recommended! [Release date: 28th of November]. Mark Kelly's Marathon at Facebook

Posted by Urban Wally Wallstrom (RockUnited.com) at 11:36 AM