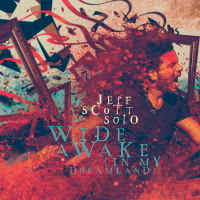 Bazinga! It's more Pompous Rock by powerhouse vocalist Jeff Scott Soto (Yngwie Malmsteen, Talisman, Journey, Eyes, Takara, Soul Sirkus, TSO, etc.) injected with Frontiers' in-house producer Alessando Del Vecchio on hand to assist in songwriting. In fact. All songs are written by Soto and Del Vecchio and you know what to expect from the two by now. Although not always big or clever on finding original arrangements in the past, Wide Awake (In My Dreamland) does give a darn correct indication of the kind of endeavour the pair invest in their compositions. It's large amounts of fun Melodic Rock, the odd pure AOR, and plenty of groove.

As with 'Beautiful Mess' or 'Damage Control' and seemingly any or every of JSS' 60 albums under his belt (including numerous collaborations), each track is an encapsulated vision of the craftmansship and sheer power that goes into the lead vocals. It's quite a lot of back-to-basic and back to the beginning of his career. Very much the Talisman, Takara, Eyes, Malmsteen, sound at play. This doesn't ring true on the title track though as it will most definitely remind you of King's X and that's always a big plus in my book(s). Mystified" reek of Talisman and 'Genesis' the album and is completed with bass-lines 'ala Marcel Jacob (RIP).

"Paper Wings" also display the talisman touch and the grand-piano (keyboard) power ballad of "Without You" have a way of finding your soft spot. The chorus goes, "Come into the light, come in from the rain. Love will never die", end quote. That's clearly and unfortunately the weakest point of the album. Whoever is responsible for lyrics should try and find some other words than "Love" next time around? Why? Because I'm a hater? No. Because here are also 4 tracks with "Love" in its title (Someone To Love, Love's Blind, Lessons of Love, Love Will Find a Way) and thus already way too many tracks on the subject. Add to this "Between The Lines" which just as easily could have been named 'Love Is Alive' as those words are constantly repeated in the refrain. Bloody'ell. 6 out of 11 tracks!!?? That's just not cool. Not cool at all. On the plus side. Wild Awake arrives with a bonus 11-tracks live CD recorded at Frontiers Rock Festival in 2019 and not a single luv-song in sight. Final Verdict: Catchy and groovy. Great music and musicians. Need however to expand the horizon and think outside the 'love' box (lyrics). Hence the R's. JSS at Facebook