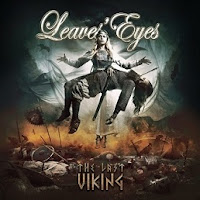 The Last Viking is from Germany and not Sweden or Scandinavia according to the symphonic power metal group and their latest blood offering to Thor and Odin. It's not Midvinterblot (mid winter sacrifice) until December though and thus why the Christians came up with the fake "birthday" of Jesus in the attempt to kill off all other religious belief in Northern Europe. It obviously worked as people now all around the world believe "Christmas" to be the birth day of Jesus. The truth is scholors don't know when he was born (the actual date or year for that matter) as the Bible doesn't say and it's definitely not December or the same date as the old norse tradition and offering. Christmas was chosen as a celebratory day because of the pagan holiday that celebrated the winter solstice and the sacrifice.

Oh, Thor and Odin, please forgive the people of Leaves' Eyes as they don't know what they do. Their more than an hour long foray or if you prefer saga? goes on and on about about golden horns and war of kings, but still not sure where the last viking would fit in? The narrator, yes, plenty of talky and choirs to be found, wouldn't let us know and the lead vocals of Elina Siirala are indeed impressive but hardly informative. Grand orchestral arrangements and the chanting anthem of "Varangians" include both flutes and operatic vocals.All dandy and nice but as soon as Alexander "Cookie Monster" Krull begins growling and howling like a tone deaf and rather monotone fog signal, the Last Viking exit the battlefield and leave behind plastic sword and sheild.

I have to give Leaves' Eyes some well deserved credit for sounding quirky and slightly off-base, as I've never heard lyrics in the vein of anything quite like this viking saga before. An odd mix of symphonic metal and disturbing subjects which provides a seriously not-of-this-earth sonic soundscape and the clean vocals of Elina are a saving grace. They may however sound (music-wise) too much like all the other bands of the genre (Epica, Nightwish, Within Temptation, etc.) and the songs are at times pretty catchy but oh-so predictible. Final verdict: Meh! Double meh and a whole lot of 'we've heard it all before'.