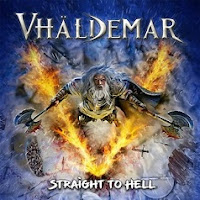 Straight To Hell, folks! Straight To Hell! Indeed. VHÄLDEMAR may (at first glance) look and sound like your average Swedish-ginger-Viking-bezerker. Take a broadsword or battle axe step back and discover the old skool Heavy Metal 5-piece from Barakaldo in beautiful Basque Country. I believe they are still a part of Spain? Yeah? This is however the band's sixth full length album released thru Fighter Records and the production was taking place in the Chromaticity Studios property of the guitarist of the band. The smashing cover artwork has been created by Darkgrove (Manowar, Battle Beast, Testament, etc).

The album display fun, uplifting melodies and both guitar and keyboard solos and complex interludes. Something which became already clear on the opening track "Death To The Wizard" as you first hear Jonkol Tera, going at it and basically bezerk behind the keyboards only to be shortly followed by Pedro J Monge at the six-string. Very flashy and intense fast solos in the tradition of proper Heavy Metal. "Afterlife" display the Blind Guardian vs. Rage (the band, not the mood) kind of feeling with hard hitting rhythms and massive sing-a-long melody. The title track is lovely old skool Heavy Metal in the vein of Accept only slightly heavier and with just a touch of Raven (the band, not the bird).

Carlos Escudero's powerful and mean vocals, which give the band much identity in their genre, truly shine on occasion and especially on this record. Do not expect any strange accent or any other no-no's as the raspy voice will simply tear you apart like barbwire in the dark. Basically tradition metal lyrics where "Hell Is On Fire", etc. However. "Black Mamba" is a tribute to the late and great Kobe Bryant. This is the kind of album that will force the Headbanger's Ball fan out of the cellar - screaming for vengeance (pun intended: twice). Final verdict: Let's face it. Vhäldemar is a Spanish force to be reckoned with and those that write them off just by looking at the artcover should definitely try and go: Straight To Hell !! Vhaldemar at Facebook