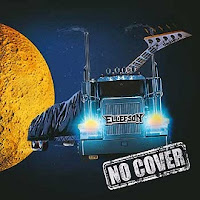 Straight from the worried MasterMind of the classy Megadeth bassist David Ellefson: There's a lockdown! There's a lockdown! What to do? What to do? We have our new studio album coming out early 2021. How about if get together a bunch of Heavy musicians and record the cover album, no, make that a double album, consisting of old 70's and 80's hard rock, and let's see if we can try and make them sound as 'so-so' as possible? Mission completed! 19 tracks of friggin' great songs of Metal's past and not a single one of them stand a chance against the superior original version(s). That's not just Ellefson, the same goes for pretty much all covers, the originals are winning approx. 91% of the time.

"Freewheel Burning" is actually one of my all-time favorite Metal anthems and the same goes for entire album of Defenders of the Faith. The raspy, barbwire vocals by Hazaert and Jason McMaster (do the google, kids) are however no match for/to Rob Halford and no fit for that matter. Jason (Dangerous Toys) does also "Riff Raff" by AC/DC and that's his kind of melody and range. He's basically the 80's dirt bike at full speed and you'll find gravel and mud all over the tracks. Hazaert is sort of right on the money with "L.O.V.E. Machine". The old W.A.S.P. stonker goes down smoothly like a shot of whiskey with the hint of 12 gauge shotgun. Seriously. The vocals are almost over the top (barbwire-wise). "Tear It Loose" (Twisted Sister) and "Love Me Like a Reptile" (Motörhead) are a couple of basic meat and potato tracks and not too shabby. Why the hell would anyone cover "Beth" considering all the great KISS songs? Tyson Leslie on keyboards (kids, google) and Hazaert does his worst impression of the metal crooner. Horrible. "Sweet FA" by Sweet featuring Todd Kerns (google?) is kind of meh, and again, the ballad of "Love Hurts", not even the Nazareth original. Billy Idol's "Rebel Yell" is such a cool track in the first place and "Not Fragile" (BTO) deserve credit. Best of the bunch. The Def Leppard track of "Wasted" add a lot of power and stamina and you definitely need to check out their debut again. Biggest surprise? The complete lack of Bay Area Speed or Thrash and you won't find a single track on the record. Final verdict: 'Do Not Cover'- what your trusty old radiator would say. I'd say it's a continental breakfast and not the full English.