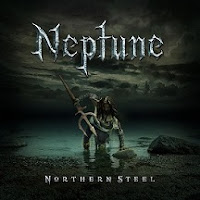 Blimey. Let's see if we can try and get the basic idea of Neptune. One of those cult 'never-recorded-an-album' Swedish acts of the early 80's and fromed by Roland on bass, Tommy on drums and Ray Alex (Glory) played guitar and handled the vocals. They played rock music inspired by big arena band as Judas Priest, Saxon, and Iron Maiden and was much more of a visual appearance as Heavy Load and Manowar with the ancient Vikings in mind. They recorded plenty of demos between the years of 1981-86 and the band featured members such as Björn Melander (Gotham City, Mogg), guitarist Jan Granvik (Glory, Grave, Glory Bells) and drummer Mats 'Driver' Förare (Glory). The last show ever was in the autumn of 86 and shortly after vocalist Ray Alex decided to join Granvik and Förare in the band Glory and the trio recorded the melodic classic of 'Danger In This Game' (1989).

In 2018, Neptune and Sonic Age/Cult Metal Classics, released the old recordings and demos from the 80s. Ray Alex sadly passed away the same year (RIP) and his brother Row has taken over the role as lead vocalist for "Northern Steel". It's newly written songs as well as the old 80s demos now re-recorded of course it's sort of the concept album about Swedish Vikings in the 800s century. In short, the plot is about how they did whatever they could to seize the Nordic steel needed for the final battle? Yeah. Very much Heavy Load, Manowar, Hammerfall, Sabaton, only not quite as over the top or everlasting.

The band history and past members are actually more interesting than the actual final product of Neptune. The opening intro of "The Prophecy", kick-off the corny plastic sword and shield Viking Metal feel of the album and tracks such as "Viking Stone" or "Ruler Of The Sea", are hardly groundbreaking and not enough metal to be Bathory and their viking saga. Many tracks are lost inbetween two worlds where thundering drums (not really) meet basic bludgeon and juvenile lyrics. It's the neat starting point if you fancy simplistic viking rock from Sweden.