ANGELICA: "All I Am" 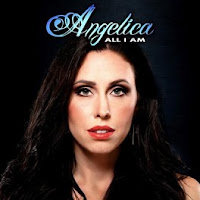 Could I have your attention, please. Thank You! Angelica (last name: Rylin) is a Swedish singer best known as the lead vocalist of The Murder Of My Sweet and not to be confused with the Christian Hard Rock band of the 80's feat. ex-House Of Lords' guitarist Lanny Cardola. It's already been seven years since her wicked debut album "Thrive", which was released in 2013, and the time is now for a follow-up which appearantly and apparantly is "All I Am". Her Murder Of My Sweet bandmate and partner in crime, Daniel Flores, sits in the producer's chair and the result sits nicely in between Pop, Rock, and AOR.

Still not sure why, however, it's very ABBA-ish (at times) only heavier of course. Dance-able AOR? I don't know? Nevertheless. Unafraid of a poppy AOR sound, Angelica go for the jugular faster than a vampire after a decade spent in the casket/coffin. There's a wicked groove to the material with several tracks shining as potential AOR dance floor faves. Simply get your local DJ to dish out these plates and you might just cause another murder on the dance floor (literally).

Opener "Calling" and indeed "Beat Them All" may just have you thinking about Nanne Grönvall on a cruise boat with Pink (or the Pinks?). It's synths and programming and darn catchy I may add. The ballad "I'm Sorry" and "Time and Space" are perfectly suited for Angelica's strong and clear vocals. It's however not something that Heavy Metal fans are going to start drooling over as it's rather more in the vein of Anette Olsson (Nightwish, Alyson Avenue) and 'Shine' than Slayer. Michael Palace on guitars/bass throughout the record and co-lead vocals on the duet "Don't Say Goodbye". The more traditional AOR of "Still Bleeding", the work of Steve Newman and thus pretty much the only song written by the old skool rocker. It will remind you the most of Angelica's debut while the other tracks are Poppier and dare I say modern? Final Verdict: Pretty catchy, pretty poppy, and not really intended to please the average metal fan? It's Angelica and "All I Am" Angelica at Facebook