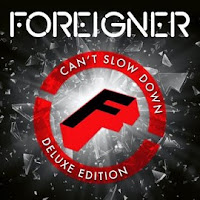 Ho! Ho! Ho! You know it's almost Christmas when it's time for yet another Foreigner compilation or in this case the 2CD Deluxe Digipak Edition of their album "Can't Slow Down". Indeed. You better watch out. You better not cry. Better not pout. I'm telling you why. Santa 'Mick' Jones is coming to town. He's making a list. And checking it twice? You better have your 80's spandex and hair and be darn nice. "Can't Slow Down" was originally released in 2009, 15 years after Foreigner's previous studio album. It marked the Melodic Rock comeback of the year, praised by fans and critics alike. The first to feature vocalist Kelly Hansen of Hurricane and Unruly Child fame and he definitely delivered first class vocals thoughout.

After the reformation of the band in 2004, Jones felt it was time to chance an album. He contacted his longtime writing and production partner, Marti Frederiksen(Aerosmith, Buckcherry, Sheryl Crow, Daughtry, Faith Hill, Mötley Crüe, Ozzy Osbourne, Scorpions, Carrie Underwood, Orianthi, Outlaw Blood, etc.) to start putting something together and they eventually co-wrote the album with the help of Hansen. The opening title track, "Can't Slow Down", one of the better uptempo songs by the band and just outside my personal Top-10. Biting guitar work, powerhouse vocals, and the very catchy refrain. It marks the start of the new Foreigner and they simply can't slow down no matter age, the amount of compilations, or according to lyric 'how the world may change'. The latter may not apply to reality anymore, considering the world wide lockdown. Anyhow. The ballad of "In Pieces" glow and spark like a radioactive cat in the dark and it's yet another classy composition. The same goes for "When It Comes To Love" and it's nearly power ballads overkill as it's pink and fluffy to the extreme. But darn good, darn good, and the saxophone cries silently in the night. "Living In A Dream" is yet another homerun and the first 4 (pun intended!) songs are excellent. Actually. Make that five as "I Can't Give Up" is yet another classy ballad. The underrated AOR release and it became a chart album in several countries, notably the UK and Germany. Something like "Angel Tonight" truly is AORmageddon! They did however mess up the tracklisting as you'll find the live version of "I Wan't To Know What Love Is" as #14 on disc: 1.

Exclusive to this 2CD Deluxe Digipak Edition is the second CD, "B-Sides And Extra Tracks" which includes a selected set of Foreigner's biggest hits as well as beloved fan favourites - all recorded in energetic live versions of which some will be released the first time on CD. It's Cold As Ice, Say You Will, Urgent, Juke Box Hero, Feels Like The First Time, Starrider, but also a couple of not-so-standards, At War With The World and Headknocker. There's also the live orchestral version of "The Flame Still Burns", originally co-written by Mick Jones and Frederiksen for the 1998 U.K. cult movie, 'Still Crazy', where it was performed by 'Strange Fruit' and Jimmy Nail. My fave spoof-rock movie. This collection is topped of by an exclusive Radio Edit of "Can't Slow Down"'s lead single 'In Pieces'. CD2 will also become available as a Strictly Limited Heavyweight Double LP Edition on transparent orange vinyl. Final verdict: Do you need another Foreigner comp? Let's all pray and hope for a peaceful and safe Christmas to the longing moments and signature song of "I'll Be Home Tonight" - tell me you will be waiting, it's been way too long. You've been on my mind and my heart has been aching ever since I've been gone'. [Release date: 27th of November]. Foreigner at Facebook