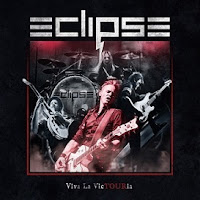 Eclipse, check. Music, check. Live, check. Audience? Oh, heck? It's Halloween (as I'm typing this) and the dead crawls out of their caskets to bring the audience back to their graves? Not entirely true (really? not true, you say?) as the pandemic brought indeed touring to a halt in 2020. However. The Swedes recorded this very DVD at the Trädgårn venue in Gothenburg, Sweden on 21st December 2019. The final gig of the year and still very much the latest and hopefully not final show ever to feature a 'Real Live Audience' instead of the walking dead and your typical zombies of today, tomorrow, and evermore. No doubt about it. The energy of the (real) audience drives the music forward on the 'Live at Trädgårn venue in Gothenburg' and 17 tracks of Eclipse goes by just like that. Kicking off the show with "Viva La Victoria" make sense as it's a storming rocker and its chanting refrain, the natural starting point of Eclipse in the modern era. Live, the band could come across as the Melodic Hard Rock version of Green Day and that's meant as the positive and fun note. It's high energy and highly contagious rock from the word go. The scene is set perfectly by Mårtensson's rich voice and when "The Storm" goes through the audience, the call of emergency and scream of help, send a shiver down the spine. "Vertigo" will send you on a trip round and round and it's all been nicely directed and edited by drummer Crusner.

Bonus material on the CD and limited edition 3xLP include only three live tracks from the band's 'Live from the Quarantine' pay-per-view special though, which was recorded at Studio Grondahl in Stockholm on 1st April of this year and obviously without living audience. Not need to worry. The DVD feature all 12 songs from the pay-per-view and no zombies were harmed during the recording. Bonus footage on the DVD and Blu-ray include interviews recorded in June 2020 about writing songs for the Paradigm album and especially "Viva La Victoria" came together as the collobration between Erik Mårtensson and Magnus Henriksson. The idea about a strong punchline and keeping it 'catchy' even though it's not proper Spanish (language-wise). It has to be 'Hasta' and not 'Viva' to be correct? Erik, sporting the very "cool" Star Wars t-shirt (Not- I'm a Tolkien fan) in the studio, speak of "Mary Leigh" as the perfect match of Blue Öyster Cult and Ghost, and Philip Crusner thinks it's a party song.

Find out plenty more about their albums and songs such as the original title of United? 'Lions' of course. Shocking to find out they borrowed riff and arrangement from Hoola Bandola Band? And their love for 60's instrumental music? Spotnicks? Oh, dear, Lol! 'The bass has 4 stings and that's 3 too many', according to their new bassist, Victor Crusner, the halfwit brother of Philip. I believe he stole the phrase from D.A.D. (the band and not his actual father). He learned the entire set in wrong tuning on first practise. 'He is an intelligent person', Erik says in the documentary, but we are still not sure? The most natural speaker and storyteller of the band though. Enjoy listening to him rambling on about 'what not' at the end of the DVD. Final verdict: It's definitely value for your money and Eclipse are three highly intelligent musicians (and one bass-player) doing what they do best - playing live music at bloody loud volume. It's 2 live concerts of sheer fun and Melodic Rock. Crank it up. Highly Recommended. Eclipse at Facebook