The END MACHINE: "The End Machine" 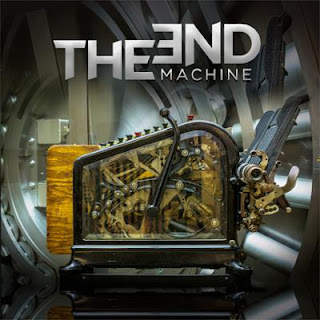 Phew. It's darn difficult to keep track and/or record of all the projects by George Lynch and Jeff Pilson (both of Dokken fame). The band name changes are confusing yet the musicians are more or less the same geezers as always? It's 'Wild' Mick Brown behind the drums (also of Dokken fame) and Robert Manson (Lynch Mob, Warrant) behind the microphone. So why not simply release this under the old Lynch Mob monicker? The line-up may have fans making assumptions about the sound, things took a different turn. "The real truth of it is that George and I have this great songwriting partnership that's been going on for 35 years and we love to work together", says bassist and album producer Jeff Pilson.

In other words. They love to mess about and confuse their fanbase? If you're looking for the full-on eighties sound (the upbeat zebra-spandex-style) try and recall the monicker. It's End machine, not Time machine. They are asking us to take a "Leap Of Faith" on the opening track as Mason sings about exposing weakness and revealing scars. It's unfortunately one of the worst tracks here and the really strange choice as track one. Supposed to work the tables and become the great invitation to the rest of album. In reality... a real downer and no fun at all. The mid-90's sound. Things are looking up with "Hold Me Down", since it's a neat mix of the bluesy side of Lynch Mob sound and Dokken. Gee... what a surprise? Mason delivers a great vocal performance and it's all very UFO (the band) somehow?

"No Game", the rather typical mid-tempo Dokken track? Pay extra attention to the guitar work by Lynch. Not as flashy or over-the-top as in the eighties groove, but you don't always need all that bling-bling to impress. "Hey fool, can't you see. Thought you'd seen the last of me? I can't die, I'm too high. My hands scratch holes in the sky". Indeed. "Bulletproof" speak of not giving up, and the tougher it gets, the harder I fight. Ultra slow rock and perhaps just a bit too monotone. "Ride It" on the other hand, uptempo and hard hitting to the point of being punky/sleazy. "Burn The Truth", the stereotyped production sound of the mid/late nineties and the same goes with "Alive Today" and "Line of Division". The epic, Kingdom Come, Rainbow-thick ballad "Sleeping Voices" will be up there at the end of the year and Lynch does his very best impression of Blackmore (solo-wise). They close the album with the pop sounding melody of LILIM (Life Is Love Is Music) and extra points for attempting to educate the people rather than coming up with a dodgy phrase? When to expect the first tramp-stamp? You know... LILIM. It's catchy though. I like it.

Final verdict: damned if you do, damned it you don't? They can't win either way? Me thinks The End Machine are stuck somewhere in the middle of two rock genres and it's difficult to know which leg you're supposed to stand upon. It's neither bad nor great and thus why you'll end up right down the middle of the road.
Posted by Urban Wally Wallstrom (RockUnited.com) at 5:02 PM