SPIRITS OF FIRE: "Spirits of Fire" 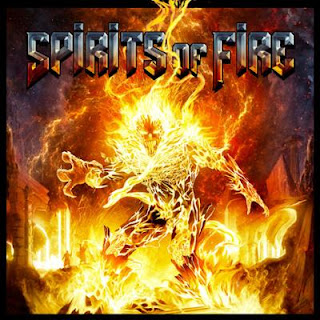 Wimps and Posers - leave this band/project alone! Vocals/ Tim "Ripper" Owens (ex-Judas Priest, Iced Earth), Guitars/ Chris Caffery (Savatage, Trans-Siberian Orchestra), Bass/ Steve DiGiorgio (Testament, Death) and Drums/ Mark Zonder (ex-Fates Warning, Warlord) was put together under the direction of renowned L.A. based producer Roy Z (Bruce Dickinson, Halford, Tribe Of Gypsies). What to expect from the Spirits Of Fire (after the title of one of their songs) and the METAL work on their debut album?

According to the press-release, the music can best be described as classic Priest meets Savatage?? Sure. But only if you ignore the first 15 years of classic JP as this takes off in "Painkiller" and barely touch ground in the seventies or eighties era. To be completely honest. There's not whole lot of classic Savatage moments to be found on the first five tracks. It's quite brutal, aggressive, and hard hitting to the point of sounding like if Annihilator recorded Jugulator with a pack of wolverines down their pants. It's ripping guitars and howling vocals by the excellent sounding duo of Caffery and Owens. Not to mention pounding bass-lines and crashing drums. The psycho-delic attempt at keyboards mayhem may however not please all listeners. Trippy and truly annoying at times.

"Meet Your End" is exactly as over-the-top and Thrash(y) Testament Metal as you'd expect from the title. Ripper spits out the words and it's the soundtrack to your horror nightmare movie. Track 9, 10 and 11, "Never To Return", "The Path", "Alone In Darkness", the most Savatage sounding tracks of them all and they're stuck at the end of the disc. The latter may also remind you of Guns N Roses and one of Axl's sappy ballads. Have a go at this if you enjoy Testament, Annihilator and JP's Painkiller sound. All hail the little Ripper!!! facebook.com/SpiritsOfFireBand
Posted by Urban Wally Wallstrom (RockUnited.com) at 5:27 PM