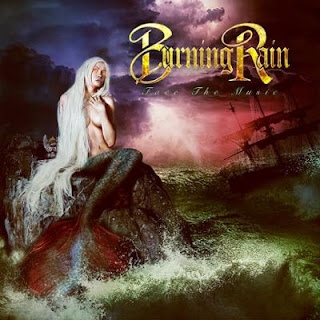 Tracks such as "Nasty Hustle", "Since I'm Loving You", the title track, or "Beautiful Road" really are poor man's version of Whitesnake. The latter trying to be cool 'ala still of the night and ended up sounding like a tool 'ala who-gives-a-damn. It's in one ear and out the other and all the time in the world wouldn't help in your quest to recall the melody. What melody? "Shelter" is a decent attempt at Led Zeppelin and their balladic stuff. "Hit and Run" include killer lines such as "Mamma always love me like the bird and the bees". "Givin little Sally in the alley when you're ready to play". Or why not "Baby always like it on top but ya love to go down. Always put me in the middle and play me like a fiddle all night". What the fudge? Yours truly wrote the same kind of lyrics at the age of twelve and I barely knew English.

Bow yer heads in shame as the overall lyrics are so juvenile and dare I say sexist? I do and I did. It's frankly just sad. You need more proof? Above mentioned "Nasty Hustle" and I quote, "Ohh your face looks like a trainwreck. Baby please I think I'll need a raincheck. Don't want ya down on your knees. You're just a dime a dozen, it's a fact". Geez. It just goes on and on throughout the track. Hostility? Misogyny? In fact. The entire track is one long international woman hating anthem. Let's leave with one last quote, "Your filthy body's such a bore. Gotta toss ya like a whore. So say goodbye". Indeed. It's time to say goodbye. Tossers.
Posted by Urban Wally Wallstrom (RockUnited.com) at 9:10 AM