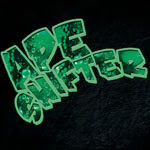 Instrumental hard rock from Germany? Kraut Rockers? Are they finally getting the recognition they deserve after decades and decades of obscurity? Hold your horses and woolly Mammoths. Let's get that monkey right off the back as the power-trio of Ape Shifter releases their sophomore studio album entitled "II", but do NOT really play the Kraut-Rock of yesterday's-years. According to the press-release, they are appealing to both seventies groove-rock fans and the punk/metal scene, the band seem to have their music definition sort of correct-ly. Calling it a off the chart mix of chunky riffs, edgy fret work, fuzzed out arrangements and cinematic landscapes wouldn't be too far off the monkey cage (hold the banana though).

Jeff Aug is the US of A underground guitarist who lives in the foothills of the Alps in the southern Germany for the last 20+ years. He has toured with the likes of Alan Holdsworth, Soft Machine, Stu Hamm, Anne Clark, etc. The great rhythm section of bassist Florian Walter and drummer Kurty Munch, ever so important to the overall sound of the Apes.

It's got the technical approach of Tony MacAlpine and the loud, noisy, close to blunt, approach of Ted Nugent going on throughout the CD. "II" is an instrumental album which changes over a series of listens to ultimately become the trusty companion on your daily trip to the local butcher. You do not enter the building though. You merely love the smell of dead animals? Only kidding. I'm sure you barely eat (raw) meat anyhow. But seriously... its easy accessibility, fun and catchy songwriting, a testimony to the power of rock n roll. I do not easily warm to all-instrumental albums, however, this is the one exception to the rule so far in 2019. It kind of makes you wonder why they're not at Mascot/Provogue? Go Ape, Go! facebook.com/apeshifter
Posted by Urban Wally Wallstrom (RockUnited.com) at 3:30 PM