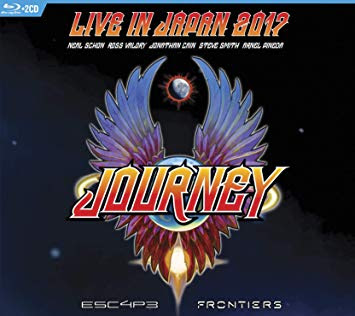 Something of a dream gig for fans, Journey went off to the Budokan in 2017 to treat an audience to full playthroughs of possibly their most popular ane revered albums, namely 'Escape' and 'Frontiers'. Existing members Neal Schon, Russ Vallory, Jonathan Cain and Arnel Pineda are joined by original drummer Steve Smith, who has been off playing jazz and cultural music for some time now.

There's few surprises here, as the band plugh through the albums in the original running order, pausing only to sandwich in a rousing thirteen minute jam version of 'La Raza Del Sol', originally not on 'Frontiers' as there wasn't room (it was the B-side to 'Still they Ride'). Aside from this it's a pretty straight gig, with an instrumental intro to each album opening track. The band reall are on fine form, and although Arnel sounds a bit wobbly on opener 'Don't Stop Believin' he soon gets into his stride and does an admirable job that even Steve Perry devotees can't find much fault with. Steve Smith shows some nice drumming touches, bringing an evolved style into the mix that doesn't intrude but can subtly improve at times.

As with many live albums, there's not much to say except that this is a fine example of the genre. The package comes with a DVD (or Blu Ray) and 2 compact discs, one with each album on it. The whole concert is over 2 hours and quite simply is a must for any Journey fan.
Posted by Alski at 2:43 PM