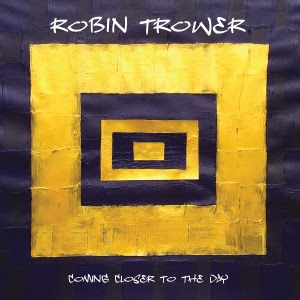 Robin Trower, the iconic guitarist who rose to fame in the 60's with the legendary Procol Harum, according to old-fart journos, recorded his best solo albums in the mid-seventies which also happens to be the age of the man as of today. Thus why the title of the new album and the darn right personal lyrics and take on the fact that we are all "Coming Closer To The Day". Bugger off to trends, new genres and styles. This geezer is not going to play nice and invite the latest new thing to co-write or sing on the album. "I think that I'm drawing much more from my roots now," he considers, "rather than shying away from them. I'm not worried about what the music is – or what people might think of it. I'm just doing this out of the sheer joy of doing it. My passion for guitar now is stronger than ever. It's still a great thrill, just to play…

Kicking off the album with "Diving Bell", a track that simply oozes of proper roadhouse blues and fuzzy guitar work might just please any fan of the man. It's got the distortion going on at eleven and acts like ZZ Top are also using this to disquise their white background and upbringing. "Truth or Lies" continues to stroll down the same avenue of mid-tempo blues and as you reach main street U.K. aka the title track, you'll notice the overall theme of the album. It's all pretty much steeped in a similar mode, structure, and formula.

Is it stuck in second gear uphill and almost out of gas? Nah. Never quite as bad, but, do not expect to find many or hardly any uptempo moments. "Tide of Confusion" is however slightly more aggressive and blunt. "The Perfect Wrong" goes through a couple of wicked segements where you might pick up on the wah-wah and straight-to-the-point solo as the highlight of the day. On the one hand I absolutley love listening to the warm tone and excellent guitar work. On the other I feel restless and start thinking, 'I don't have time for this mid-paced blues album'.

That's probably the biggest problem with "Coming Closer To The Day". How the earth are we going to find the time for something like this in 2019? We are all Closer To The Day by the minute. In the end. I decided it's better to at least spend some quality time with Trower and his latest effort. It sure beats watching any of many cooking shows and program on tele (zzz!). Final verdict: Solid stuff -only a bit too mid-paced.
Posted by Urban Wally Wallstrom (RockUnited.com) at 12:03 PM