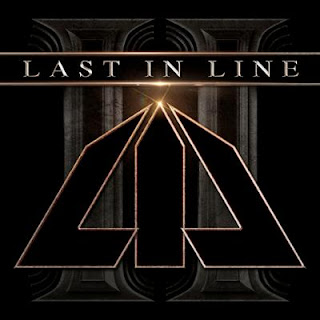 "Cause when the hero dies and the truth becomes a lie. Black out the sun". The Dio connection? Vinny Appice, Jimmy Bain and Vivian Campbell were Ronnie Dio's co-conspirators and co-writers on the "Holy Diver", "Last In Line" (the album from which they took their name) and "Sacred Heart" albums. Not enterily sure why I should include this since "II" sound absolutley nothing like those classic albums. Unfortunately. Jimmy Bain passed away at the age of 68 on January 23, 2016 (RIP) and their debut album was released in February 2016. They brought in renowned bassist Phil Soussan (ex-Ozzy Osbourner etc.) and continue to release music that have as much in common with DIO as yours truly (I'm the Urban Legend).
.
In fact. Tracks such as "Black Out The Sun", "Give Up the Ghost", "Sword From The Stone", "Electrified", "The Light", sounds like Soundgarden-light and I definitely prefer the classy work of Bad Motor Finger, Super Unknown and Down On The Upside. Major Soundgarden fan. "Year of The Gun", sounds more like the Tygers Of Pan Tang leftover than Dio and that's never a good sign in my books. The meat and potato version of NWOBHM. Truth be told. I miss the extra crunch and not to mention extra memorable melodies. The whole album suffers from this and as a result, it lacks that certain something that turns a decent effort into a great album.

Final verdict: There's simply not enough of stuff here that really reaches out and grabs you by the throat. "Landslide" is however all great from start to finish. Great musicians, great production by Jeff Pilson (Dokken) - pretty average/decent song material.
Posted by Urban Wally Wallstrom (RockUnited.com) at 12:19 PM