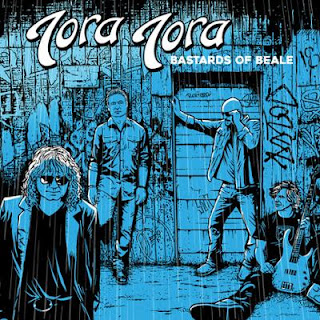 First Jetboy and now Tora Tora? Bottom and barrel, two words that comes to mind. Nevertheless. I actually enjoyed The Jetski's and handed out the decent 3 rating as they were clearly born to fly. This on the other hand. Well... there's no Surprise! Attack! and it might just crash. Tora Tora is an American hard rock band formed in Memphis, Tennessee during the 80s. The origin of the band name is a reference to the song of the same name, released by Van Halen on their 1980 album, "Women And Children First". End review? Nah. Hold on to your cats and woolly jumpers as we're getting ready to fight off the ugly old Bastards Of Beale.

First impression. Goodie. They make Jetboy sound like the Beatles. Second impression. Material-wise, it's awful dusty and darn bluesy here. Third impression. There's no such thing as third impression. I believe you'd file this under poor white man's blues and ditto trash music? Proper Whiskey stained vocals by Anthony Corder as he manage to hit the correct note every third track or so. It's definitely looking grim so far and we haven't even mentioned the production yet. The poor drummer sounds like if he's playing on all sorts of cans, tins, and various bottles.

All you ever do is complain and trying to be cool, but end up sounding like an annoying smart-ass? Fair enough. "Son of a Prodigal Son", the nice slow-blues. I enjoy the wicked groove of "Silence The Sirens", it's the best song on offer and actually really, really, good. It's one brief moment of clarity before they get back to beating the crap out of the blues, their instruments, cats, and strange folks in woolly jumpers. Final verdict: Your daft uncle's garage band finally managed to get themselves a record deal. 'All hail Rock N Roll. Long live the Bastards of Beale'. Back to the drawing board.
Posted by Urban Wally Wallstrom (RockUnited.com) at 5:22 PM