KINETIC ELEMENT: "The Face Of Life" 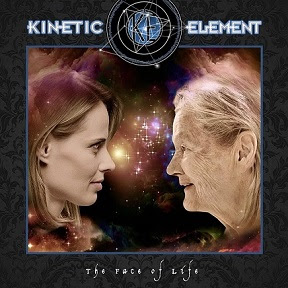 The long and winding road that eventually leads us to the Face of Life by Kinetic Element? Don't go thinking the Beatles though as this is old skool Symphonic, Progressive Rock. It's all very 'fantasy' sounding and role-playing nerds all over the world are going to wet themselves over the extra long compositions. "When you cross over the Rubicon that everyone must face. You'll turn around at the trumpet sound and see the whole human race". Lyrically, it's spiritual themes and observations on the state of the world and the human condition.

"We know the wind doesn't blow in vain. Seeking to cry out every person's name. And though the list has no end once it's begun. The song of finishing is often sung". Musicwise, it's early YES meet early PETRA (up to More Power To Ya') and the CD features four (4!) tracks of new music clocking in at 47 minutes. However. There's a special bonus track at the end of the disc, so I guess that's five tracks and 50 minutes to be completely honest. Expect layers of fantasy sounding keyboards and overall impressive ebony/ivory work by band-leader Mike Visaggio.

The production is old skool and bassist Mark Tupko thumps the strings in the style of Chris Squire (RIP). Vocally, Saint John Coleman is no match to Jon Anderson though. Nonetheless. One listen is all it takes to tell you where the band are coming from. It's Yes, Yes, Yes, and hardly a single 'No' throughout the album. Nothing on here is particularly original, nor is it modern sounding in its structure and sound. It simply oozes the seventies and there's not a single note post 1975 to be found. Keeping in mind that Petra never sounded 'up to date' or in touch with their times on the classic, original, line-up (perhaps with the exception of Beat The System). "Angel of change, Gibraltar's roots are shaking by your coming". Never boring, never truly intriguing. It's simply just pretty solid stuff... if you're into Yes-prog.
Posted by Urban Wally Wallstrom (RockUnited.com) at 12:22 PM