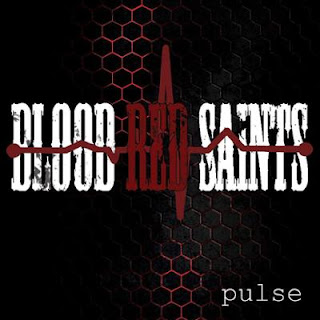 Pulse? Barely ticking, I'd say. It's the release of the third album by British rockers Blood Red Saints which debut was released at Frontiers records (the premier league of melodic hard rock labels) before losing too many games and ended up playing in the championship (AOR Heaven). There's no shame in playing at the 2nd league as long as you're keeping your dream alive. Vocalist Pete Godfrey is no doubt a major Def Leppard fan. He jumps, he cries, he screams battle cries, before breaking into the rather fun rock of "I'm Your Devil". Perhaps the least Def Lep sounding track of them all?

There's no compromises, no excuses, simply the best 11 songs we could write and we are proud of the results. The band proudly announced as the lads are trying to push the boundaries of melodic rock. It's basically "X" meets "Slang" only not as impressive and with a rather dodgy production. The latter is obviously not that strange considering budget and studio sessions. The lads are likely to play cheerful, sweet, and gentle melodies, and they do step up to the plate to hit a homerun... every once in a while. For instance. "Cross To Bear" is a wicked little tune with just the right amount of hook, line and sinker.

Unfortunately. There's too many moments which simply passes the listener by as they break into one dimensional rock 'ala cliche-ville. There's not a huge lot to rave about here and it leaves you with a final verdict of: Meh.
Posted by Urban Wally Wallstrom (RockUnited.com) at 12:00 PM