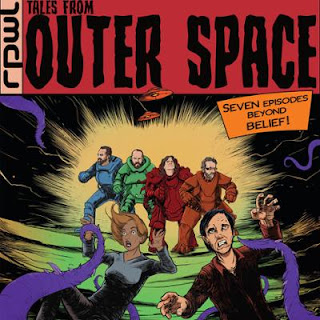 Progressive Rock and quirky concept albums, it's the bread and butter of a genre that gave us endless hours of joy and head scratching moments. It's no difference from the air that you breathe, it's pretty much essential stuff and the only reason that you're still out there in space. Well. We're at earth, but we're part of the universe and thus space and there's a void that you simply need to fill with marvelous moments such as this monster of an album.

The Germans of RPWL has no doubt created something out of the ordinary with Tales From Outer Space. Perhaps not the concept album in the true sense, but there are seven short stories about science fiction. If you've never heard of the band (shame on you), RPWL started out as the Pink Floyd cover act in the mid-nineties and has since recorded some truly great and spacey prog-rock albums. There's plenty of space (geddit?) between all the arrangements and instruments, allowing all members to shine. Everything is so crystal clear that I couldn't help but think of the way Floyd and David Gilmour sounded in their heyday.

Don't get me wrong. It's not just another copy-cat album and act. They have certainly managed to craft their own path to success, but of course, there is always an underlying comparison to you-know-whom. It's thought-provoking stuff from the word go and opener "A New World" set the (s)pace and standard of the entire album with its message of 'aliens are not impressed by the evil caused by humans on earth'. Thus why they decided to bugger off and leave this mess for us to (not) resolve. It's the whole humans are evil/aliens are kind theme, let's hope it's true since we'd like to hear more music from the Bavarian prog-rockers.

More than anything, Tales From Outer Space is all about class and it's difficult to pick highlights and moments. It's basically all good and something like 'Welcome To The Freak Show' take the Floyd-prog and mix it up with Ultravox and their classy work of the eighties. The ten minute long anthem of 'Light Of The World' goes through all the different faces of Art and Prog-Rock and will leave you wanting for more as time passes by in a blink of the eye (ear?). It's sheer class from opener to closer 'Far Away From Home' and the choice of spacey arrangements and soft voice of Yogi Long (not to be confused with Yogi Bear) favours the songs, and that is clearly stated on tracks throughout the album. Add to this tons of spacey keyboards, wicked rhythm section, and lyrical guitar playing by Kalle Wallner, and you're all set for the Prog-Rock experience of the year. Essential stuff if you're into spacey Prog-Rock in the vein of you-know-who. Highly recommended!!!