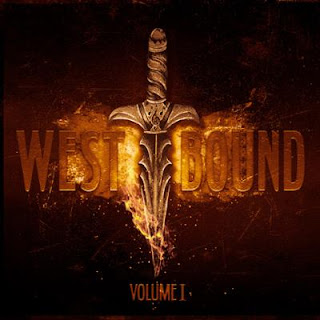 West Bound is a new project/band formed in the L.A. area by vocalist Chas West (ex-Bonham, Lynch Mob, Resurrection Kings, etc.) and guitarist /producer Roy Z (Bruce Dickinson, Halford, Tribe of Gypsies). With a line-up completed by Jimmy Burkard (guitar), Jason Cornwell (bass), Dave Moreno (drums) and Stephen LeBlanc (keyboards), the guys offer their take on the eighties hard rock sound with soulful vocals and old skool melodies?? Besides Spirits Of Fire, Roy Z also produced this and he probably fell asleep (hard at work) behind the board as opener "Never Surrender" almost sounds like the eighties demo?? It could be the mastering done by Andy Horn or Perugino's executive producer note (nah!). Then again. It's produced, engineered, mixed by Roy Z, and the volume drop is simply not acceptable in the year of 2019.

It's otherwise a great little tune in the style of Lion and their cult classic release "Trouble In Angel City" from the unholy year of 1989. It's got the swagger and attitude of the 80s act and Kal Swann must be darn proud of the lads. "Dance Of Life" speak of how some people live from day to day (some are lost trying to find their way). It's bits and pieces of Blue Murder and Lion. "Ain't Gonna Drown", the rather boring blues tune. "Beautiful Dream", the great power-ballad in the vein of Bonham and Kingdom Come. "Nothing" is basically nothing to write home about. "Roll The Bones", you might say and think Rush, but it's rather (Robert) Plant lost in his eighties solo period (zzz!). "On My Own", "Keeper of the Flame", mildly decent Bonham numbers. "Turn To You", the typical MTV piano-ballad of the early nineties and don't forget to hold your lighter to the sky. What? No lighters?  What's next? No music on MTV?? "No Room For Sympathy" takes you back to the Lion's den and Trouble In Angel City. Closing track, "Traveller", the return of Robert Plant and Kingdom Come (ouch, the Led Zep fans are going to hate that).

Final verdict: Overall decent/nice material. Will it stand the test of time or the label competition? It might just get lost amongst all the other releases at Frontiers.
Posted by Urban Wally Wallstrom (RockUnited.com) at 5:25 PM