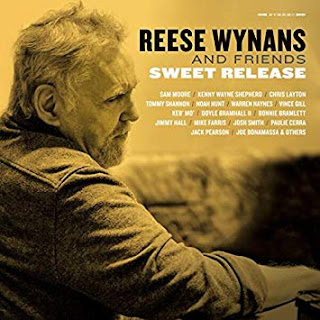 Ryan Wynans, one of those musicians that you might have heard on record, but not actually heard of?? The keys man can be found on tons of albums, tickling the ebony and ivory for the likes of The Allman Brothers Band, Boz Scaggs, Stevie Ray Vaughan, Joe Bonamassa, Larry Carlton, Los Lonely Boys, etc. Rock & Roll Hall of Fame member and world-renowned Nashville-based keyboardist, Wynans first-ever solo album "Sweet Release", the long-awaited release after a career spanning fifty years (50!) and plenty of trips on the West Coast and in and out of Florida.

Recorded under Joe Bonamassa's inaugural credit as a producer. Bonamassa has long been a fan of Wynans' work, urging him to create a solo album. It's no doubt stellar musicianship, and the old material given new take and featuring star guests including Keb' Mo', Kenny Wayne Shepherd, Warren Haynes, Vince Gill, Sam Moore, Doyle Bramhall II, and Bonamassa himself, etc.

Hardly anything new though and behind the title track awaits the 70's Boz Scaggs tune or as Wynans puts it and I quote, "I thought it was a great song back then and through the years, I've been waiting for people to cover Sweet Release. But no one ever did, so I suggested it for this album." end quote. Ehem. If no one ever recorded a cover of the song for the past +40 years, perhaps it's just not that great of a song in the first place? A bit too dry and dusty in the year of 2019? It doesn't exactly scream 'world class composition', however, top notch musicianship and it's overall nostalgia saves the day and moment. Several Stevie Ray Vaughan numbers where "Crossfire" is a fitting tribute to the man who Wynans recorded with as the Double Trouble sessions. Close to the original, but no cigar, since we're missing to most important ingredient of all (that's Stevie in case you got lost along the Ray, ehh, way). Final verdict: It's difficult to get excited about the Wynanas' debut and if anything, it made me want to listen to some Vaughan albums for the first time in ages.
Posted by Urban Wally Wallstrom (RockUnited.com) at 1:52 PM