RAMOS: "My Many Sides" 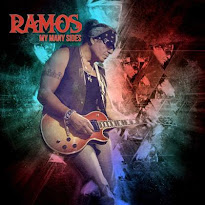 12 sides to every story? Twelve tracks on the record and not a hit-single in sight. Nevertheless. Josh Ramos is a classy six-string bender and forever connected with or rather to some big selling records in the world of AOR. Big sounding records anyhow and especially The Storm albums (S/T 1991. Eye of the storm 1995) are must have to any serious collector of the genre. This on the other hand, not as much. There's no actual production to be found on the entire album! The sound quality of your below average tape and everything is worse than your daft neighbours garage band's demo. It's like if it's been recorded through some sort of crap system that would make your 80's ghetto blaster sound like a million bucks.

It's overall a rather bluesy effort and not the catchy-happy stuff that made the Storm albums essentials. Tiresome blues hard rock I may add and it's no good when your material, though original is stuffed full of second rate Great White melodies. Note that I'm not really a big fan of the mentioned act. Guest vocalists such as Eric Martin (Mr. Big), Danny Vaughn (Tyketto), Harry Hess (Harem Scarem), Terry Ilous (XYZ), Tony Harnell (TNT), Tony Mills (Shy, TNT), should make for a great listening but what good are vocalists without proper song material? It's a shame really and especially since "My Many Sides" feature the last recorded performance from the late Mills (RIP).

Final verdict: the album simply lacks the essential elements that makes any type of music work - decent song material and ditto production. Back to the drawing board or in this case computer? My Many Sides and they're all rubbish? The story of my life.