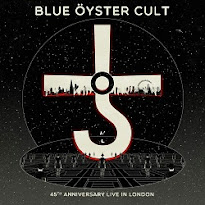 Blue Öyster Cult and some kind of anniversary? The 45th to be exact and that's way back in 2017. Yes. Three years ago and we're talking about their debut album which yours truly haven't been listening to prior to this live DVD/CD. Sure. A couple of tracks here and there, but this is a first time. Live at O2 INDIGO, London, UK at the Stone Free Festival on June 17th 2017, the band are playing the first album in its entirety! To be frank or bloom or buck dharma for that matter. I've been desperately trying to find any or some thing to type down, on a positive note, regarding their debut effort from the ancient old year of 1972. Alas, no such luck and it's frankly just a very dire, dull, and out-dated effort with hardly any high-notes or high-lights. Perhaps it's a generation thing and a matter of being too young to appreciate the BÖC debut? But I find it remarkably straight-forward and flat without the standard ups and downs by the band? Blimey. I would most likely mark it down as the 1 and a half R's out of 5 possible. It's going nowhere fast really and the melodies are low-key and dare I say very forgettable? "Stairway To The Stars" could send you on a trip across the sky, but it's quickly back down to earth with an awful crash and bang. You probably need to be the stark raving mad, long-time member of the cult to truly appreciate the hippie arrangements of their debut. They go through that first album like zombies is search of brains. Way too trippy and definitely not holding up well after five decades or so. I have to give them credit for sounding fine and I do enjoy some of their bigger hits towards the end of the disc. The early BÖC albums are not my cup of tea though and they recorded better albums later on in the 70s and 80s. Behind the scenes moments are neat and that's about it really.
Posted by Urban Wally Wallstrom (RockUnited.com) at 3:54 PM