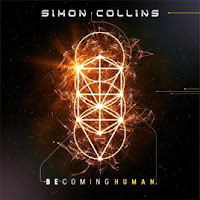 Becoming Human? What's it all about? A little bit of rock, a little bit of prog, a little bit of pop, and a little bit of electronica. Oh, perhaps you were looking for a more deeper meaning and answer? Simon says (pun intended) that 'there's a truth beyond our lives and non existance". Or direct to the point and no messing around with silly words, according to Collins, all you need is love for becoming human. Bummer. All you truly loved pets out there (cats, dogs, pigs, whatever) better start running for the hills or you'll become humans too! Oh the horror, the horror! This world was such a prefect place in the beginning and then came the human... now we're all doomed (or trumped?).

Anyhow. It's Collins fourth solo album and the son of "Face Value" and "Hello I Must Be Going" go all out on singing, on the drums and work on producing and writing modern pop/rock/prog/industrial music that is definitely eclectic, electric, and ever so adventurous. It's dreamy, trippy, without being too heavy on the acid or out there in space 'ala the worst LSD acts of the hippie generation. It's very much the album effort and Collins is obviously sharing a strong connection and chemistry with keyboardist/programmer Robbie Bronnimann. The two are responsible for the majority of songwriting as well as production and sonic display. They are pushing all sorts of boundaries with quirky arrangements and overall nicely produced material. Anything seems possible to the two were so many others are simply going through the motion and turning songs into something cold and cliched. "No Love" is however a little bit too much Coldplay, especially since I'm kind of fed up with their so-so sound.

But let's be fair, there's more, much more to Collins than meets the eye, ehh, ear. The title track goes through several genres and styles and it's meaty riffs played on strange instruments with lots of different beats and programming. It's basically electronic groove and progressive arrangements which combines the soft and heavy perfectly throughout and it's overall a very strong album, if you don't mind the genre bending compositions. Have a go at this with an open mind and end up surprised by the next generation of Collins.