HELL IN THE CLUB: "Hell of Fame" 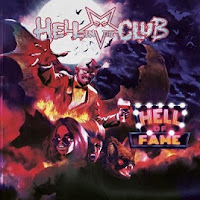 Hell of Fame? Are you supposed to laugh or cry? One thing's for sure... there's a very fine line between tragic and comic. But okay... it's tongue-in-cheek and at least they're not trying to be serious (I hope not?). You know, like Manowar or any 'Church burning Norwegian Black Metal act' of the early 90's. Lol! don't get me started! Tossers and losers. To be honest. If you've been staying the hell away from Hell In The Club in the past, this platter won't change your mind. The lyrics are the worst and the cheesy image is merely... ehh... too much? not enough? Featuring members of Elvenking and Secret Sphere? Oh, I'd keep quite about that if I were you...

It's not all bad though, music-wise, rather fun and typical Melodic Sleaze and Metal of Scandinavia and darn right lazy people could file this under Crazy Lixx vs. Ghost. Not really though. Next to these acts, "Hell Of Fame" is a pretty lame stuff, it has to be said. There's a cheesy hair metal quality at work here that really does no one any favours at all, something which only becomes obvious on tracks such as "Joker", "Mr Grouch" and "No Room In Hell". It's second rate Warrant and third rate Guns N Roses material and I believe it contains the very blueprint for what-killed-hair-metal. "Lullaby For An Angel" give power ballads a really bad name and Mötley Crue should sue them for "Here Today Gone Tomorrow". There's a girl named Sue, oh, the thing's she could do...

Final verdict: It may sound like I hate them? Not at all. But try as hard as you like to take them seriously, it won't happen. Nonetheless. I'm sure you could still have a fun time at your local footie bar/pub. Playing "Lucifer's Magic", "Last of an Undying Kind", "Worst Case Scenario" or "We'll Never Leave The Castle" on your ghetto blaster while drinking and pissing yourself to death. It's a party! It's darn catchy and cheesy at the same time. Yeah. Two word review: Catchy-cheesy. File this under: Hair Metal for kiddies!