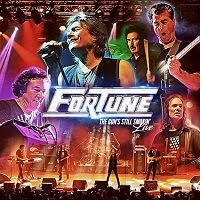 Mr. Greene, Mr. Rat, Mr. Nilan, and the two Fortune brothers. Blimey. It sounds more like your average children's story than a rock concert? Ricky Rat (bass) is no doubt the animated character and quite the attention seeking little animal. The man of thousand faces and just as many fun and wacky moves I may add and that's always a big plus in my books. There's nothing more boring than watching a DVD with a band from the past with none or little activity on stage. The guys are blasting hot lead and silver bullets all over the place and will send the werewolfs' packing for a trip around the moon. Where's the howling at???

Lo and behold. The DVD is more pleasing to the ear/eye than expected and that's entirelly down to sheer joy of the musicians. They're actually having a ball up there and really seem to appreciate the chance of performing their cult classic AOR infront of the audience at Frontiers Rock Festival. It's been professional filmed and dirrected by Moviedel/Maurizio Del Piccolo and the vision is darn right pure AOR in mind. Fair enough. A couple of strange moments (angle-wise). The last thing I need is yet another close-up of LA Greene's armpit! Yuk!!

The least impressive member of the band would have to be Mick Fortune. The kit is spare and bare and he's more or less a statue behind the drums. Only the arms are (barely) moving and you can't really tell if he's having a stoke or playing the drums? Would it hurt crack up a smile or display any emotion for that matter? It's Mick "Stoneface" Fortune from now on. I don't quite get the audience either for that matter. The musicians are doing good, the music is good. The people should be up and dancing the tables but are clearly too afraid to show some effection? It's not cool to move?

Opening up the show with their best, "Thrill Of It All", still commands the crowd reaction and sends shivers down the spine with its typical mid-eighties sound. It's a nice blend of the 1985 material and II from the year of 2019. "Don't Say You Love Me" sits nicely in with the likes of "Deep In The Heart Of The Night" and "The Heart Is A Lonely Hunter". There's also "Through The Fire" from Top Gun and Mr Greene is a strong frontman and I'm impressed by the moves and licks of Richard Fortune. The somewhat underrated guitarist in my humble opinion. You'll get a bit of SAGA vibe on several tracks. Make no mistake. These AOR geezers are rather fun to watch and The Gun's Still Smokin'... highly recommended! Buy or die (or whatever).