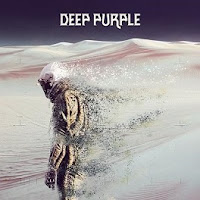 Whoosh? A little softer, a little mellower, a little typical gone older and country?? Not quite, however, Bob Ezrin convinced the geezers to come down or up or whatever? Anyhow, he invited the band to Nashville to write and record the songs for their 21st album and it sounds like an old REO Speedwagon cast off and is decent enough without being totally 70's Purple. Now, it doesn't include twang guitars and country, but it's ever so middle of the road Purple.

Some may say it's a more than reasonable effort and some brilliant bass playing (Roger Glover) to be discovered through out the record. Indeed. But on the other hand. It's a huge let down and perhaps not quite enough to make it the classic it could have been? The smooth and nearly strange music is enough to cast you back to any one of Smokie's best album (hint, there's no such thing) as well as being a little remeniscent of bits from Gillan's worst solo albums of the eighties. However. The album highlights how Gillan's voice is nearly just as good as it once was. Sure, you may notice tiny cracks and rougher edges, but what else to expect from a man in his seventies plus. Like the the odd couple of tracks or three, but it's all very much a case of being everything from an okay listen to ever so boring, but seldom more than okay or darn right meh.

Opener, "Throw My Bones" clocks in at barely 3:30 and there's no proper solo or interlude whatsoever. It's very much Purple gone radio mainstream, but I can't say that I hate it or find it uninteresting. It's still 'nice' enough and the same goes with the following number of "Drop The Weapon". Steve Morse and Don Airey does the nice interlude and duel solos and the song is a minute longer this time. The bridge is however better than the refrain and that's not the ultimate solution. "All The Same In The Dark" is unfortunately the zzz moment and no good at all. "Nothing At All" sounds more like Smokie vs. Manfred Manns Earthband. Very soft-rock-y. "No Need To Shout", one of the songs without a proper refrain or hook. "Step By Step", purple gone boyband? I don't get it at all? "What The What", I'll have to agree with the title? What the fudge? This must be one of their worst moments ever. They're actually singing and I quote, 'So bad, we were so bad, we've been so bad' and you can merely nod and agree. Honky-tonk-bar-band crap tune. "The Power of the Moon", interesting and something different.

Final veredict: But truth be told, Whoosh really lacks so much of Purple's energy and sparkle that I believe it's time to try and convince Blackmore to reunite for one last farewell album and tour.

Posted by Urban Wally Wallstrom (RockUnited.com) at 11:35 AM