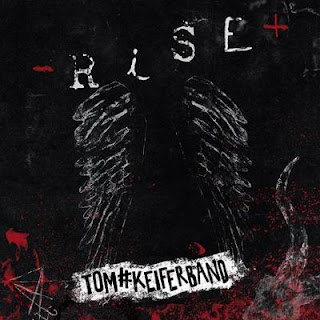 Rise - is it a fairytale story or a dissatisfying platter? Former Cinderella vocalist in search for the tiny glass slipper? I've been looking forward to listening to the new solo album by Tom Keifer ever since the previous one aka the solo debut of 'The Way Life Goes'. Unfortunately a lot of things happened inbetween those years and it's been bad news from the Keifer camp. "We were trying to capture the feeling of what people have witnessed live with this band", Keifer explains. "There's an off-the-rails, real live feel to 'Rise' and that's what we were going for. It shows a real kind of angst and reckless abandon that we tried not to polish too much", end quote.

He's not kidding. It's angst overlord and there's no such thing as polish if we're talking about a turd? Nah. That's too harsh. However. The production is raw and really gritty without ever trying to focus on more than one thing at the time. It's rather dodgy to be honest. The songs are average at its best, some are below, the voice is raspy as hell and the evil stepsisters cuts off toes, and the other heel so they can both fit into the shoes of RISE. Are we jealous of Cinderella's charm and music. Do we cruelly take advantage of Tom's musical past and the fact that anything by Cinderella would blow this out of the water? Well. The rather laid back "The Death Of Me" and the classy tune of "Waiting On The Demons" are not bad at all.

The big question, will the Fairy Godmother magically transforms a pumpkin into a carriage, the mice into horses, The Cinderella vocalists' horse into a coachman, and dog into a footman, before turning the ruined production into a shimmering soundscape and the shoes into glass slippers. Well... do remember that as Cinderella leaves for the ball, the Fairy Godmother warns that the spell will break at the stroke of midnight. The Bottomline: The glass slipper shatter on the floor - the end.
Posted by Urban Wally Wallstrom (RockUnited.com) at 8:22 PM