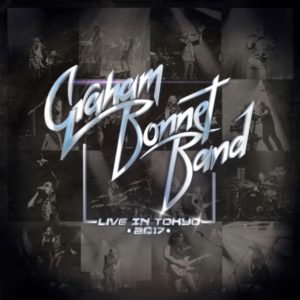 Nevermind the bottle cap b.s. Here's the way more fun and interesting Graham Bonnet guitarist' challenge. Did any other hard rock/metal vocalist ever work with a better set of guitar players? Merely speaking about actual bands/groups and not the odd studio project. Richie Blackmore (Rainbow). Michael Schenker (MSG). Yngwie J Malmsteen (Alcatrazz). Steve Vai (Alcatrazz) and last, perhaps least, but still v-e-r-y impressive, Chris Impellitteri (Impellitteri). Not bad, especially considering that Bonnet never really became a household name to the average rock/metal fan. In fact. Most of them are still trying to figure out who the hell we're talking about and how did he manage to work with all the big names?

Anyhow. The other year, the man released the re-recordings of songs from the Rainbow, Michael Schenker Group, Alcatrazz, Impellitteri days/daze and went on tour in Japan. Thus the very live recording of this album and The Graham Bonnet Band's 'Live In Tokyo 2017'. There's also been several Alcatrazz' live recordings as of lately and we already knew that mr Bonnet can belt out these songs in fashion and style. The very confident snger and especially considering... ehem... his age. I know. It's kind of lame and not PC to single out the age thing, but it's quite relevent when it comes to singers and their voice.

The sound quality is pretty excellent and the opening notes of "Eyes of the World" sets the pace and standard of the live album. "Live In Tokyo" is a great collection of Bonnet's finest moments and performances. The live sound is raw yet relatively polished if that makes sense. The authenticity of the man and his band though, never really in doubt. You can still do wonder with the right amount of reverb and gloss. Neat
Posted by Urban Wally Wallstrom (RockUnited.com) at 1:41 PM