TWILIGHT FORCE: "Dawn Of The Dragonstar" 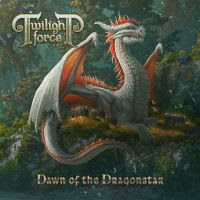 There's a brand new 'Dawn Of The Dragonstar' at the castle of Twilight Force. There's also a brand new vocalist in the shape of Alessandro Conti (Trick or Treat, Luca Turilli's Rhapsody). What's more to reconsider or rather try and ignore? They have now gone even more Rhapsody Of Fire and kitsch and that's including the accent and everything that goes along with pizza and pasta. Not the best of idea. In fact. I would describe the band's latest album as something that mostly and perhaps only hordes of die-hard Rhapsody Of Fire fans may enjoy.

"With the Light of a Thousand Suns" borrows heavily from you know whom, but proceeds to add a jarring mix of choral vocals and soaring guitars, attempting to emulate the symphonic power metal of the past without getting remotely close. Nearly all the tracks continues with the same references, keeping it true to modern kitsch and galloping metal. To be frank. It's simply just not the same kind of quality and songmaterial as the latest effort by, say, Dragonforce. It's clear that The Twilights' are the mid-league championship team while the Dragons' are at the Premier league and Champions league.

There is so much lyrical nonsense to these songs that you could be forgiven for thinking you were being told a story about Tom Cruise and his "wonderful" life and religion. However. As a metal unit, they bring the music in all its colourful fantasy and cinema glory, and it's filled with not too shabby orchestration. It's the overall material and vocals that makes Twilight Force a band for the second league though. Final verdict: have a go at the 'Dawn Of The Dragonstar' if you simply can't get enough of the genre and style.
Posted by Urban Wally Wallstrom (RockUnited.com) at 8:20 PM