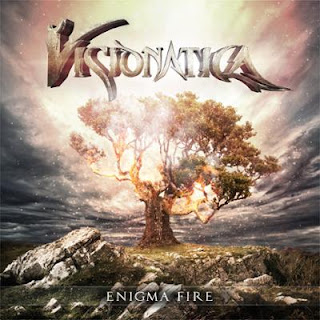 Wait... what? yet another Glasya album? (see review elsewhere). Nah. It's merely just another symphonic metal album with crystal clear female soprano vocals combined with powerful melodic guitars and orchestral elements. It's once again the whole darn package including the classically trained vocalist (Tamara Avodem) and the rather mad, but rather excellent, over-the-top guitarist (Manuel Buhl). And like forementioned Glasya, the strenght of the band, no doubt the vocalist and not nearly as much the song material.

Not as diverse nor original as you'd wish to tell you the truth. There's not much here in terms of style and arrangements that you haven't heard many times before. You'd wish for a few better stonkers and a few more chances wouldn't have gone a miss either to be honest. Kudos for the production and the simply desperate fan of acts such as Within Temptation, Nightwish, Delain, Xandria, etc. might just still get a kick out of these tracks until the next big album of the genre arrives. Personally, I couldn't remember a lot from this album as I woke up the following day and week for that matter. Conclusion and final verdict: Tamara is a star and has a wicked voice but the material is anything but memorable. facebook.com/visionatica
Posted by Urban Wally Wallstrom (RockUnited.com) at 1:48 PM