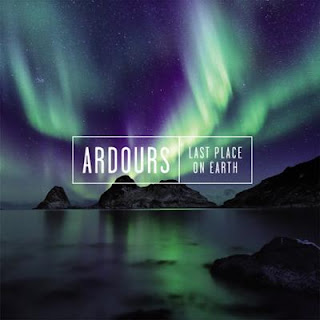 Ardours, a nu alternative gothic metal band featuring lead vocalist Mariangela Demurtas (Tristania) together with multi-instrumentalist and producer Kris Laurent. Originally formed in 2015, Ardours was the product of Mariangela and Kris' longstanding friendship from both of their involvements in the Sardinian (Italian) metal scene. In 2006, Mariangela moved from Italy and joined the Norwegian band Tristania, but she and Kris always kept in touch. They'll no doubt be accused of ripping off the likes of The Gathering, Lacuna Coil, Within Temptation's gothic approach as well as the vocal phrasing, and clearly shares their ability to dramatise their vivid point of reality. For instance, the title track speak of sad and depressive moments where "No matter how bright you shine. Your glitter will never be gold".

According to Mariangela, "Ardours has more rock and 80s influences compared to Tristania, including a bit of new wave sound which is something that me and Kris love. When I chose to be part of this project, I knew I wanted to sound very expressive without being technical so that I could give a more nostalgic sound to the words", end quote. Since Mariangela wanted Ardours to be a melting pot of different personalities to add to the unique flavour of the songwriting, she decided to ask Tristania's drummer/lyricist Tarald Lie to write the lyrics and record the drums for the album. The mix of these three elements has resulted in a style, straddling the lines between rock, metal and goth.

They certainly don't shun sentiment and sadness rather than embraces it, where the moving stories of missing you, goodbye, this is the end on "Last Moment" and "The Mist" are prime examples of old skool 80s Goth meet modern ditto. The keyboards/synths are very much upfront on many of the tracks and are at the same time very bombastic and utterly dark. More to be found of the catchy and direct 'No One Is Listening'? I certainly have and I find their messages and stories about melanchoy and sadness to be rather... ehh... uplifting?? Last Place On Earth is a good place with the right kind of atmosphere... if you're into female fronted nu/alt/goth. facebook.com/ardoursband
Posted by Urban Wally Wallstrom (RockUnited.com) at 12:36 PM