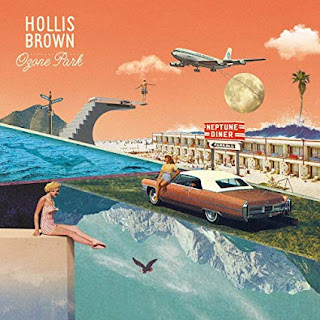 Simply Red on steriods? Opening track "Blood From A Stone" sure had me thinking about the ginger geezer and his band. Singer/guitarist Mike Montali provide a lot of soul and the mix several different layers and elements of funk, blues, disco, and soft rock on their latest record, Ozone park. It's sort of music in the vein of The Faces (or rather Rod and his Americana), Simply Red, Tom Petty, and the smooth tapestry of the Counting Crows. On paper or screen, the rather interesting concept and record. Unfortunately not quite as fun or memorable in harsh reality. The songs are simply not radio friendly or catchy enough to grab ya' and they are all pretty much steeped in the same mid-tempo formula and mode.

"I think with this record we wanted to make a statement,” explains Montali. “Rock music can still be done in a modern way that is still as good as some of those acts from the past". Well. The Petty like groove of tracks like "Do Me Right" impress initially but never build on the moment. They throw some fashionably smooth type vocals into the mix and even indulge in the odd country/The Cars melody (Forever In Me), but nothing really sticks. The latter a poor man's version of Drive. "Someday Soon" is about as fun as watching wet paint dry or listening to the dodgy Counting Crows composition.