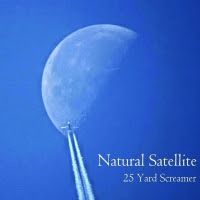 25 Yard Screamer? They are from Wales, you know. They should be raising their tiny little fists in anger and shouting obscenity to the ref about not getting awarded the penalty in their previous football match. 25 Yard Screamer?? Whatever. "Natural Satellite" is nevertheless their latest offering to the ancient Gods of Prog and various spectacles and flower-power nonsense.

The opening track of "Storyteller" and especially its intro may sound like circus macabre at first before turning into the very melodic rock tune. Not nearly as much Progressive Rock as expected and it's rather more Tomorrow's Child than Pink Floyd. I seriously doubt that people may still recall and remember the early/mid 90's group of Tomorrow's Child though? The following track, "Devastate", Styx meets Tommy Shaw goes solo and Nick James (vocals/guitars) may have been listening to quite a lot of Shaw material in the past? Add to this PORCUPINE TREE and you're even closer to home.

The start losing the plot around "The Silent Rising" and it's 15 minutes of proto gaga and lyrical moments that tell the strange tale about people that hides in the plain sight of all people, as they silently walks with the fearful. It sadly got worse and slightly more disturbing when "While We Are" are trying to convince us and I quote, 'while we drink, we are fun'. Gee... that's deep. The rest of its lyrical content, hardly worth the trouble and you really shouldn't be drinking and smoking all that stuff while putting down your message on record.

Although it's interesting to begin with, Natural Satellite just doesn't do it for me. In fact. By the end of it I have grown quite tired of what becomes a lot of detours and off-the-road driving. "It's an album that has had a varied and unexpected journey" say bassist Matt Clarke. Fair enough. It's just not my kind of Journey. No pun intended. But hey... don't stop believin'
Posted by Urban Wally Wallstrom (RockUnited.com) at 4:46 PM