SPREAD EAGLE: "Subway To The Stars" 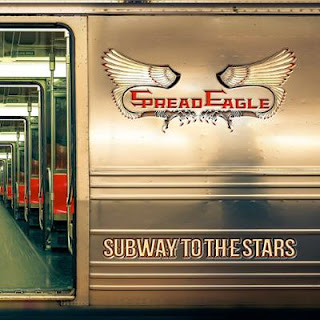 "Switchblade Serenade", one of the cool songs from MTV past that you might still find on... ehh... youtube?? Spread Eagle is however the name and position and punky sleaze is the game. They actually reformed already back in 2006 under the direction of original members Ray West (vocals) and bassist Rob DeLuca (who has also worked with UFO and Sebastian Bach) along with two new members, Ziv Shalev (guitar) and Rik De Luca (drums). The New York band has been together ever since and finally decided to record the comeback album aka "Subway To The Stars".

What to expect from the band? A slightly updated sound and vision, but still rather true to their roots. West is not quite as high-pitched nowadays and the dirty, gritty sound of something like "Grand Scam" may not always fly under the wings of the original Eagle. I like it though. It's rough stuff, straight-in-your face, and very much energic. According to the lyrics, "We've been sleeping where the eagle lies under evil skies that never fail to monetize the plan". Yeah? History repeating? It's the Sex Pistols' story all over again.

Recording took place at Studio E in Brooklyn, NY with Grammy Award winning engineer Tom Camuso. There's a punky and dark groove to the material with many tracks shining as potential head smashing faves. It's ever so melancholy and anti-social though. In fact. It's borderline grungy on several tracks and always snotty punky without the usual happy ending. Do not expect eighties AOR or hair metal from the Eagles and you might just do fine. You'll probably end up in the pit, madly dancing along to their vicious melodies. Try it if you enjoyed the latest album from LA Guns also at Frontiers. facebook.com/spreadeaglenyc/
Posted by Urban Wally Wallstrom (RockUnited.com) at 1:56 PM