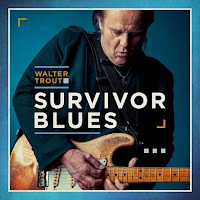 The Trout's gone fishing for new material and ended up covering some of the coolest blues songs on this side of the century? That's what I thought at first as I played the marvelous opener of "Me My Guitar and the Blues". It's one of those all-time best slow blues anthems that you need to hear before you die. But you know what. I'm not even going to prented to know all about these songs and their original performers. I guess I could google and nicely name-drop as I go along, but what's the point?

I do not know every thing about the ancient blues. I do however know that "Be Careful How You Vote" is the living truth no matter time or era. Especially considering the bozo at the white house or the turkey in turkey, just to mention two of all the SMF's in this twisted sister world. Why try and emulate the sheer brilliance of the dino blues? Well. According to Trout, he was fed up listening to the same old covers on the same old radio stations and I quote, "Does the world need another version of that song?’ So I came up with an idea. I didn't want to do Stormy Monday or Messin With The Kid. I didn't want to do the blues greatest hits. I wanted to do old, obscure songs that have hardly been covered. And that's how Survivor Blues started", end quote.

Ehem. Yeah. It's obscure stuff and some of the tracks should have stayed hidden to the world in my humble opinion. The biggest problem with having "Me My Guitar and the Blues" as the opening track? Everything else now feels like second best and left over material. That's a bit harsh, but it's simply impossible to look past the song. It's every thing Gary Moore (RIP) ever wanted to be and record and Jimmy Dawkins did perfectly. Walter's warm tone and voice is however the next best thing and his solo will have Moore fans crying of joy. Final verdict: Nice. Cozy. A tad boring?
Posted by Urban Wally Wallstrom (RockUnited.com) at 12:19 PM