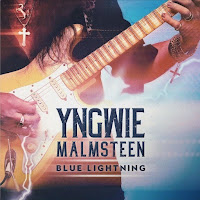 Yngwie is a guitar legend, no doubt about it. His early albums were groundbreaking when it comes to "shredding" and when he started to move to a more song-oriented style, he released my three favourite albums of his, "Trilogy", "Odyssey" and "Eclipse". He did release some good albums after those too, but eventually I lost interest in his music.

With "Blue Lightning" Yngwie is trying something new, at least for himself. It's a compilation of blues and classic rock covers, with four new Yngwie originals in similar style. Just like on his recent albums, he's also singing lead on this.

I find this album somewhat more interesting than his previous few efforts, because his own songs have been quite forgettable lately. On "Blue Lightning" he at least covers some well-known, memorable songs. Curiously enough, one of my favourite songs here is actually a new Yngwie original, the title track.

As a singer Yngwie is adequate, not a "singer's singer" but he stays within his boundaries and does an OK job. His voice actually reminds me that of John Norum. Quite a few of Yngwie fans are more interested in his guitar playing though, and rest assured, there's plenty of that here. While most blues players believe in the "less is more" school of thinking, Yngwie is Yngwie and there's no shortage of shredding. The "Yngwi-sation" works on some songs, but mostly it's overwhelming. The ZZ Top song "Blue Jean Blues" is probably the best (or worst) example of that - the guitars just strangle the life out of this song. On the other hand, I really like Yngwie's version of "Paint It Black", although it could be even better with a stronger singer. The "Smoke On The Water" cover is a short version, only 3:19 mins and for the second half of it Yngwie concentrates on shredding, which is... well, something one could expect.

Malmsteen has gotten a lot of negative feedback for the production of his recent albums, but I think "Blue Lightning" sounds pretty good. With that in mind, and the fact that the Ygwie-penned title track was one of the best songs here, I guess there's still hope that Yngwie can come up with a good album of original material someday.