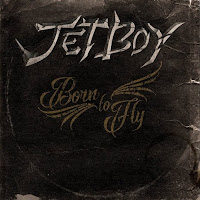 Jetboy? The latest Marvel Super Hero movie? His mother always told him to not run at the airport, but the boy was clearly Born To Fly? Nah. Erase the dodgy introduction. Surely you recognize the name of the band that one graced us with "Feel The Sake" and various sleazy song and dance numbers such as... ehh... well. To be completely honest. I sold the CD on eBay many many moons ago and I can't recall a whole lot of titles. Simply google if interested in more background history. I prefered the Faster Pussycats' anyhow and I notice that Eric Stacy handles the four-string-thing at Jetboy.

Good to see that three of the Feel The Shake members are still together and that's including the hoarse vocalist aka Mickey Finn. One things for sure though. US of A gave us plenty of these kind of acts in the late eighties and it's no worse nor better than most of them. It's however never a good idea to kick things off with your worst song on the album. "Beating The Odds" about as fun as watching wet paint dry and as I reached for the gun, I kept thinking WWJD? Bored at hanging at the cross I decided to give this another go and I'm actually glad I did.

No longer filed under "where are the now", The Jetboys are as dirty, filthy, sleazy, and mean as ever. Call it sleaze, call it rock n roll, call it biker-rock in the vein of The Quireboys, Little Ceasar, Dirty Looks, etc. It really doesn't matter as it grooves nicely along to the sound of destruction. The ballads and especially "The Way That You Move Me" walks to the same beat as The Faces (ROD!) and The Stones doing the tearjerker, and obviously The Quireboys as of lately. "Brokenhearted Daydream" - The Clash goes hair metal and I seriously dig the sheer attitude of the track. Throw in bits and pieces of Hanoi Rocks and you're even closer to the core. Mickey FINN (geddit?) does a mean harmonica on various tracks and It's all very Matti Nykänen (RIP). WTF? First Eddie The Eagle (see Starbreaker) and now Matti? What about Janne Boklöv? Final Verdict: Not too shabby.
Posted by Urban Wally Wallstrom (RockUnited.com) at 12:22 PM