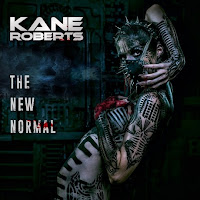 When you run into Kane Roberts and his 'The New Normal' in the unholy year of 2019, you're entitled to suspect it's no ordinary body of work. Steriods are plenty and the Child(ish) material of Saints & Sinners has been replaced with rather typical and sadly now a bit dated rock/soft-Metal of the last decade and 2009. Mister Master Roberts first came to fame as the very butch Alice Cooper guitarist of the eighties. Guest musicians on this platter include the old Coop' line-up and former bandmates: Kip Winger, Paul Taylor and Ken Mary. Not to mention that Alice sings on the creepy sounding "Beginning of the End" and you're basically all set for the return of Raise Your Fist and Yell!?

Unfortunately. There's not a whole lot of traditional melodic hardrock to be found on this electro produced album. Industrial light? Don't get me wrong. This is far from the shabby outing and effort. There's plenty of razor sharp hooks, dangerous riffs and flashy guitar work. It's just stuck inbetween two worlds and they say time waits for no one (unless it's Tom - geddit?). But once behind the mike and his guitar, there's no mistaking the man who, three decades ago, was spoken of as the Rock'N Roll Rambo.

It's a great opening to the record as an unmistakably classy slice of melodic metal comes your way in "King Of The World". It's ever so dark and cyber friendly in its structure and formula. Is that a smile, nah, didn't think so. But darn it, it's catchy as feck. I only wish this would be the overall standard and new normal. "Life is Wonderful. We're ugly beautiful". However. If you're going forward with your music and not looking back (as stated by Roberts in the info sheet) then why co-write songs together with Brent Smith (Shinedown) and Lzzy Hale (Halestorm). They are both yesterdays news and the kids has since long moved on to new and better(?) acts. Haledown and Shinestorm? It's The New Normal... ten years too late?
Posted by Urban Wally Wallstrom (RockUnited.com) at 12:24 PM