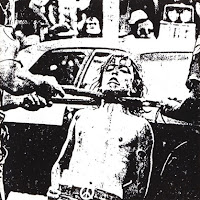 Do you recall Vio-lence? The San Francisco Bay Area thrashers decided to hang up their boots in 1994 and the remaining members formed the riff heavy, groove infused thrashers Torque. Fronting the band was guitarist Phil Demmel (Machine Head), who also took on lead vocals for the first time, along with guitarist Ray Vegas, bassist Deen Dell and with drummer Mark Hernandez. Torque released three demos between 1994 and 1997. The self-titled album released on Mascot Records in 1996 stands alone as the sole studio release from the band.

It's now been re-released with four previously unreleased bonus tracks from their 1997 demo. What ever the reason, Torque split up a long time ago and I haven't the faintest idea why they decided to re-release this at this particular time and year? Some people are going to say they should stop making such a horrible reacket. However. I must say that I prefer this style of Thrash and Hardcore-lite over some of the later era albums by Pantera. This has got cheeky Vio-lence met Prong (gang vocals all over the place) break downs and merely the hint of Pantera and Machine Head of course.

Torque takes no prisoners from its off, kicking straight in to the opener "H.L.S." which is a pounding number which I can only assume Phil Demmel is kicking himself for listening to while thinking about acts such as Prong and Suicidal Tendencies. The volume goes down a bit as you play the four bonus tracks, but nothing too disturbing or out of control. They don't add much to the overall sound picture, but they are frankly too much later era Pantera for my personal taste. I prefer the early/mid 90's sound. Disturbing is the word regarding the art cover though. Sick!
Posted by Urban Wally Wallstrom (RockUnited.com) at 12:13 PM