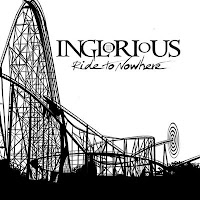 The Inglorious Bastards... ehh... Quentin Tarantino? Inglorious are constantly bickering and fighting amongst themselves and vocalist Nathan James had a classic meltdown before Christmas. Oh, internet, you've done it again. When not throwing shite and squirrels at former members, each other, and the world, their third studio recording, "Ride To Nowhere", display a darker, more reflective album than their previous releases. Dark as the night or merely moody introvert?

One things for sure. You need to spin this on repeat and then let it all sink in for a while. It's definitely more of an album effort than trying to come up with radio hits and singles. "For me this album is very personal. I am for the first time writing about a lot of my feelings, relationships and losses", says Nathan James. "On this album I feel that the songs are a true reflection of what we've been through over the past few years - both as a band and as individuals" end quote. They've been through a lot according to the rant and merely James and Phil Beaver (drums) remain in the band last time I checked. The drummer is about to explode? -Spinal Tap style.

The albums eleven tracks offer some wicked variety, "Where Are You Now" is a upbeat number that its virtually impossible not to tap along to whilst something like "I Don't Know You" is a laid back, sinful soulful tune which would be a perfect soundtrack for the movie about the mentioned rant, more about mood and soaring vocals than some of the other tracks heard so far. "Tomorrow", borrow quite a lot from Coverdale and Whitesnake whilst "Time To Go" is very much Electric Boys. It's otherwise a very British sounding platter which inlude everything from black pudding, fish and chips, deep fried mars-bars, to Thunder, Whitesnake, Bad Company and Free. The album was mixed by the legendary Kevin Shirley (Led Zeppelin, Aerosmith) and it's sonically pretty great indeed. Final verdict: You need to go old skool on this sucker and simply play it on repeat. It's getting better and better with each spin. Up to a certain point of course.
Posted by Urban Wally Wallstrom (RockUnited.com) at 12:30 PM