QUIET RIOT: "One Night in Milan" 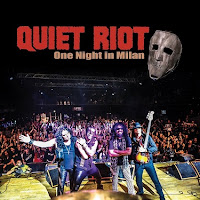 Cum on feel the noize? Confession time again. I knew absolutly nothing about Slade (perhaps with the exception of Run Run Away?) when I first heard about the crazy gang of Quiet Riot. They were no doubt the eighties U.S. of A version of Slade as they recorded the best selling effort of Metal Health. Whatever. The kids of the eighties couldn't care less about any old fart act of the 60s/70s (which they supposedly copied?). No kid should ever bother finding out who copied who(m) anyhow since there's no such thing as "new" music anymore. It's all been done before and musicians are merely repeating the past. And we are all doomed according to this live CD/DVD.

It's hard to get mega excited about a band when/where the two main figures are dead and gone (Kevin Dubrow, Randy Rhoads). The rhythm section of Frankie Benali (drums) and Chuck Wright (bass) are still trying to keep the flame alive and I guess it works if you're at the venue and shouting along to the likes of Slick Black Cadillac or The Wild and the Young. It's no difference from your local act doing Slade and Quiet Riot covers. However. Infront of your TV/PC and while watching the DVD, it's just not happening and guitarist Alex Grossi is mostly looking down on his shoes. Not to mention that "new" vocalist James Turbin is truly annoying, with his over-the-top, stage persona. His crowd interaction: way too eager to please. His vocals are pretty darn good, it's a shame about the whole American version of Bruce-Bruce of Samson and Iron Maiden fame and the endless attempts at 'scream for me Milano'. Citizens of the world. Let's help out America with "The Wall" and extend it around all the states and not just Mexico and never let Quiet Riot out of there ever again. That's why they're building the wall, right? To never ever let any one out of America???
Posted by Urban Wally Wallstrom (RockUnited.com) at 12:17 PM