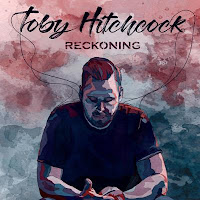 Vertigo? Psycho? Birds? Or merely just a handful of beaks and feathers? What ever movie you fancy, this particular Hitchcock does not belong in the category of groundbreaking horror. In fact. He's about as scary and/or sinister as Winnie The Pooh in search of more honey. The dark front cover (James Hetfield from Metallica?) and title of "Reckoning" surely must be the most misplaced ART-work ever since Paul Simon decided to ditch that ginger bozo. Nevertheless. Since the Pride of Lions are no longer waving the flag of classic schlock and AOR, Toby's return to dut-dut keys will certainly keep things pink and fluffy.

Toby didn't type any of the lyrics/music though and it's all done by Marcus Nygren (4 tracks), Steve Newman (3), Mike Palace (2), Alessandrio Del Vecchio (1) and Del Vecchio/Nigel Bailey/Pete Alpenborg (1). They've managed to write songs in a similar template and formula to acts such as Survivor/Jim Peterik/Pride Of Lions, Aviator, The VU, Jim Jidhed. Make no mistake. There are some unabashedly Jim Peterik-esque moments here and as if to admit as such, Reckoning offers a cheeky nod to Survivor on the opener "No Surrender", with its "where-do-we-go-from-here" call from/to the eighties. "Queen Untouchable" is every thing you ever wanted if you're the fan of AOR Drama.

Most of the tracks in this release seem to have pure old skool AOR as their official agenda and statement. Playing things on an more ambitious note than many other acts and artists, the pompous keyboards will certainly prompt some serious panty waving when played live infort of the ladies. To be perfectly frank. It's one of those albums which you could neither love nor hate. The soaring vocals, the close to perfect AOR production, it's a testament of how to mix heartfelt melodies and messages whilst avoiding overuse of modern thoughts and genres. It's just a feel good album, perhaps with a couple too many moments of deja vu? How to summarize in a few words? Try and look past the awful artwork and title as everything about this album breathes and lives like 1985. That's a more appropriate title right there: 1985.
Posted by Urban Wally Wallstrom (RockUnited.com) at 12:28 PM