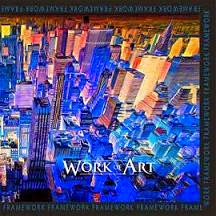 Work-o-fart? Absolutely not. 'Framework' will clearly not go by like a you-know-what in the wind. Definitely worthy of the Work Of Art moniker and concept as it's strictly uplifting and fun melodies of the eighties. Stronger, better, catchier - would be a prefect description of their latest effort as the Swedes have found their own groove and sound here. I know it's popular to mention Westcoast and Toto while talking about WOA. However, there's sooo much more to "Framework" than first meets the eye/ear. It's basically just the lovely mix of AOR, Power-Pop, Hi-tech, and the hint of Toto and Chicago. If anything, WOA follow in the great long line of Swedish traditional Pop/Rock music and strong melodies. Well. At least in my humble opinion.

I guess I just have to mention cult Power-Pop acts from Sweden such as Big Money and Fingerprints. They both had a knack for coming up with the goods and really catchy material. "Framework" works on the similar basic level and audience only featuring more of the pure AOR sound of course. It's layers and layers of the massive and huge 80's production and sound. Glossy keyboards and guitars. It's one impressive hook after the other and they have steadily built a reputation as one of the most interesting and fun acts on the Frontiers label and roster.

There's plenty of AOR and soft-rock explorations on this record and I absolutely love their more progressive side of "Shout Till You Wake Up" and "The Machine". WOA has always had an immediately impact and point to their compositions though and the opening tracks of "Time To Let Go" and "How Will I Know" are no exceptions. Uptempo, fun, tailor made for the AOR dance-floor. Check out the nearly danceable guitar work by Robert Säll. The hi-tech westcoast rock of "Hold On To Love", probably the best song Chicago and Toto never recorded in the late eighties. Lars Säfsund does his best 'Peter Cetera meets Joe Williams' impression and it's just perfect melodic bliss. "Natalie", one of those great moments in the grand AOR/Westcoast tradition of songs named after a woman. The boppy-poppy, "The Turning Point", magical soft-rock, and "My Waking Dream", the moody ballad suited for Tracks (classic radio show in Sweden).

Two words to sum it all up: Catchy Fookin' Hooks. Well. That's three... but, who's counting? Highly recommended.
woa.se
facebook
Posted by ROCKUNITED.COM at 9:55 PM