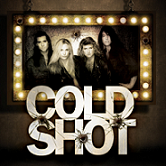 Cold Shot, one of those L.A. Sunset Strip acts of the eighties that 'almost' made it and that Eonian Records are so good at digging up? They sold out places such as The Roxy and The Whiskey at regular bases and secured endorsement deals. They even recorded two songs "Juicy Lucy" and "Higher", the latter co-written by the Cavazo brothers (Quiet Riot, Hurricane) for the soundtrack to Brad Pitt's film, "Across The Tracks" in 1989/90. This led to a deal offer from Virgin Records, but, the wind of change (grunge) came and and Cold Shot became yesterdays news.

The eleven tracks on this CD were all recorded between the years of 1989 to 1991. Additional background vocals by Nate and Paul Winger (there's a Kip connection) and the two above songs from the Pitt film and soundtrack are indeed included on this record. Their flamboyance lead singer Adam Murray is quite the sleazy vocalist with the hint of barbwire and blues. The same goes for the song material as they come out sounding like Great White meets Every Mother's Nightmare or if you prefer Faster Pussycat meets Cinderella? Simply mash the four acts together and end up with Cold Shot? Well. Not quite. But you know what I'm getting at.

It's sleazy/bluesy eighties stuff and quite the groovy attitude as the opening track of "Juicy Luicy" isn't complete without the harmonica intro. Hard hitting numbers such as "Mine All Mine" and "Heart Of The City" are fun and rather aggressive sleaze/blues tracks. The power ballad "Without Your Love" is the nice surprise as they manage to capture the essence of the Cold Shot sound even if the chorus part might just have you thinking about Dokken. "Long Legs", inspired by Crue ála Girls Girls Girls?, and "Captured", ehem, capture the strong vibe of Van Halen (pre-chorus) and the Ratt/Poison refrain. No pun intended. It's hardly rat poison :)

I'm not too keen on uptempo tracks such as "Higher" as they simply lack hook and melody. Some of these tracks could/should have stayed in the vaults or in this particular case, Brad Pitt's old movie. Final verdict: The majority of tracks sounds great. The solid release and pickup if you're into sleazy eighties blues and above mentioned acts.
Posted by ROCKUNITED.COM at 6:12 PM