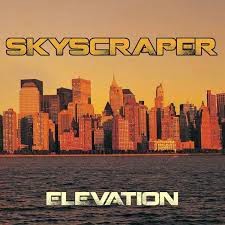 New band on the scene Skyscraper contains some names that you've undoubtedly heard before.  Helmed by Martin Kronlund (Dogface/Joe Lynn Turner/Lover Under Cover) the melodic rockers consist of vocalist Lee Small (Shy), bassist Dave Boyce (Airrace/Quireboys), guitarist Tor Talle (Joe Lynn Turner/Fergie Frederiksen/Rob Moratti) and drummer Imre Daun.  There has been quite a bit of buzz surrounding this upcoming release and after a listen to the CD I found that the comparison to Bad English to be quite accurate.

”Sail Away” leads the pack of fourteen tracks with an upbeat tempo and tons of vocal harmonies a melodic chorus and some delicious guitar work.  The lead single/video for ”Monday Morning” can be seen now via YouTube and is another in the vein of the opener, a great representation of the whole album.  In the first of two songs breaching the five minute mark ”Fay Wray” is a masterpiece of interwoven harmonies.  The rest of the album follows suit displaying some excellent AOR style music with the haunting vocals of Lee Small.  Aside from what Iíve already mentioned some other high points include the 80ís flavoured ”Walk Through Fire”, the Bad English/Alias sounding ”Playing With Fire” and ”Sweet Little Sister” where the guitars are a little more forward during the chorus.  The low points to me are the sappy ballad and longest running track ”Everybody Cries Sometimes” and the slower paces of ”Through the Eyes of Liberty” and ”Runaway Hearts” (which also appears acoustically as the final entry) mostly because I generally prefer a harder edge to my rock/metal.

Overall a solid melodic rock effort and worth the price of admission for fans of that genre.